In November I wrote an article mentioning that the alternative magazine Fortean Times had briefly referenced Flat Earth within its pages.

In that article I also speculated about when and if they would be doing any larger articles about it in the future. Anyway, in the most recent edition of the magazine (March 2016) they did a double page spread on the topic. The focus of the article was the American rapper B.o.B.'s recent conversion to flat-earthism and his much publicised 'beef' with the astrophysicist Neil deGrasse Tyson. The article then goes on to give an overview of the history of flat earth belief, mentioning Parallax, Shenton et al. It was a decent article, but unsurprisingly was somewhat dismissive of its topic. It'll be interesting to see if this is just a one off appearance for flat earth or whether it gets further page time. 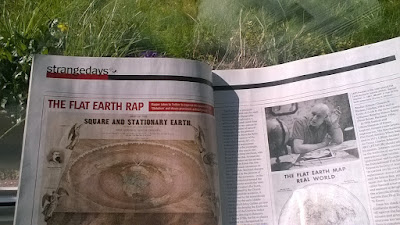 In the last month or so the flat earth issue has also came up in the pages of another magazine I regularly read. This time the magazine NEXUS (issue: Feb/Mar 2016). For anyone unfamiliar NEXUS is an alternative magazine that covers topics such as UFOs, ancient mysteries, alternative health, that sort of thing. The mention of flat earth came in the Letters to the Editor section. One reader wrote in asking why the topic wasn't being covered by the magazine.


"..because of a conspicuous and curious lack of coverage on one particular (and one huge) conspiracy, I am beginning to see your magazine as having a set agenda, as disappointing as it may be. Where is your open-mindedness? Why is there no coverage at all about the flat Earth awakening that has been happening this past year? YouTube is awash with overwhelming evidence that any logical, open-minded truth-seeker cannot ignore. Is your magazine simply too invested in promoting the idea of aliens from other planets and the spinning globe to dare touch this topic? My decision to reluctantly cancel my subscription awaits your response."

The editor gave a lengthy reply which included the following;


"I am well aware of the recent resurgence in the flat Earth theory. The YouTube clips I've see of it seem to stem from interpretations of horizon distance and curvature anomalies which, in my opinion, are not evidence of a flat Earth. In my view there are many false beliefs about light and gravity which hinder a proper understanding of the whole subject. For example, the "speed" of light varies with latitude, and gravity is not a property of mass. I believe in the existence of a charged aether and thus that gravity is not a pull from "within" but a push from "without". ...The Earth is not flat, which is why there has been no coverage in NEXUS."

Again, it'll be interesting to see if the magazine continues with this attitude, or if it softens its opinion and starts to give the topic more leeway. 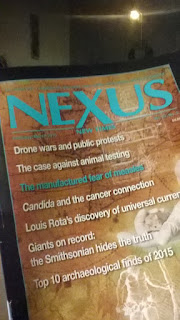 On a side note, I've just been flicking through the pages of NEXUS whilst writing this and have noticed that there's an article in it about animal testing, which I'll probably read in the coming week or so. It reminded me of another aspect of the flat earth movement that's been making me think of late. Namely, the flat earther Eric Dubay. If you go by YouTube views and subscriptions Dubay is probably the leading flat earther out there. I generally like his videos, and he speaks very well whenever I've heard him in interviews, however he has a fondness for Hitler and an attitude to the Jewish people that makes it hard for me to follow his work without feeling a little bit uncomfortable.

Anyway, here's what's been on my mind lately. Dubay is also an active vegan - animal rights feature quite heavily in his videos along with the flat earth stuff. Now, as I've mentioned on this site before, I'm a vegetarian, and the whole not-killing-animals thing is quite a big deal for me. It's something I'm quite passionate about. Anyway, watching Dubay's videos has not only reinforced my passion for the vegetarian issue, but it's also even helped to push me towards veganism a little more. I've stopped eating eggs, and have even started to question the eating of diary products (although it's probably fairly unlikely I'll give them up any time soon).

So I find myself in a position where I have a lot of admiration for someone in regards their attitude to animals - even to the point where that person has actually influenced my life personally. But, at the same time, their views on other issues, in this case the Nazis issue, are quite unpalatable to me. It's an odd mix.

So, I don't subscribe to him on YouTube because he expresses some opinions I disagree with. Yet at the same time I subscribe to plenty of people on YouTube that eat meat, and who by extension are inflicting suffering on animals on a daily basis - something I'm strongly against. I don't really know where I'm going here, but I feel I should at least state on record my feelings of hypocrisy.

Finally, the last topic I was going to touch upon, before I got sidetracked - the topic of Edward R. Murrow. A couple of posts back I wrote about Murrow and his possible propaganda work on such issues as the Earth Hoax and atomic weapons in the 1950s. I also mentioned how he was the broadcaster who helped instigate the censure of Senator Joseph McCarthy.

Anyway, I recently came across an article on-line that noted the relationship between McCarthy and the Kennedys. We'd normally expect the Kennedys and McCarthy to be at polar opposites on the political spectrum, with the Kennedys as darlings of the liberal left and McCarthy viewed as a right wing anti-communist anachronism. However, there seems to be clear evidence that the two had a lot in common - and that they maybe even shared a common cause. A cause that no doubt led to the downfall of both.

The relationship started with a friendship that developed between McCarthy and Joseph Kennedy, father of JFK and Bobby. However, both JFK and Bobby would also grow to become good friends with him.

The article in question is quite short and I highly recommend reading it. I'll quote some of the important bits below.
http://mcadams.posc.mu.edu/progjfk2.htm


...the younger Kennedy brother would maintain a deep loyalty to a man he loved enough to make the godfather of his first child. In 1955, Bobby displayed his residual feelings of loyalty for McCarthy even after the Senator's fall into disgrace at a dinner meeting described by the court historian of Camelot himself, Arthur Schlesinger, Jr.

"Still his Irish conception of loyalty turned him against some he felt had treated McCarthy unfairly. In January 1955, Edward R. Murrow [who had issued a famous anti-McCarthy telecast the previous year] spoke at the banquet honoring those, Kennedy among them, who had been selected by the Junior Chamber of Commerce as the Ten Outstanding Young Men of 1954. Kennedy grimly walked out."

Another incident, this time concerning JFK, shows the same respect for the man. This incident happened at a Harvard dinner;


[..]when a speaker had likened McCarthy to the convicted Soviet spy Alger Hiss, JFK rose to his feet and declared "How dare you couple the name of a great American patriot with that of a traitor!" and walked out.

How odd this is when viewed against the normal mainstream backdrop of American history.

Another article on the same site lists the links of friendship between JFK and that other arch political villain Richard Nixon.
http://mcadams.posc.mu.edu/progjfk1.htm

Have we got Nixon all wrong as well? To be honest my ignorance of American politics means I wouldn't know either way really. My views of Nixon are mainly informed by episodes of the Simpsons and John Lennon records xD ..maybe I need to educate myself, then re-educate myself on the issue :)

A good rule of thumb to start with would maybe be; if he really was a bad guy, the powers that be wouldn't have let him fall from grace

After all, they seem to look after the real bad guys don't they - maybe Nixon had some redeeming moral features that stopped him from being truly useful to them :)
Posted by Neil at 9:40 PM