The Six Lives of Henry VIII

I've recently read two plays that deal with the life of King Henry VIII. The first was the Shakespeare play Henry VIII (said to date from 1613) and the second was a play by a guy named Samuel Rowley called When You See Me You Know Me, first published in 1605.

My main motive for reading them was to look for signs that the conventional account of the Henry VIII story was in error. Incidentally, I should mention that my last post concerning the Thomas More painting was part of the same vein of thought. A debate had been raging on the applied-epistemology website about this painting and the various conspiracies surrounding it. I only really published because I wanted to link to the image and needed somewhere in internet-land to upload it to. Hence the brevity and complete lack of context (anyone interested in the story of that painting will find the relevant links in the Who birthed the Renaissance section of the above mentioned site).

Anyway, back to the plays. The Shakespeare play was pretty standard Shakespeare really. Nothing special, but as ever enjoyable enough to read. It told the story of Henry's marriage to Anne Boleyn and the subsequent birth of Queen Elizabeth. In fact, I felt the focus of the play was more on Elizabeth than Henry. The play told the story as we know it today - divorces Katherine, marries Anne, Wolsey dies, Cromwell comes along, etc. The play ends with the birth of Elizabeth so none of the subsequent marriages are mentioned or dealt with. In fact, from a historical revisionist point of view the most interesting thing about the play is the fact that it's alternative title at the time was All is True. A title that may suggest there was some contention over what was the truth at the time of writing.

Luckily, however, the second play provided much more canon fodder. This play dealt with the birth of Edward, the death of Jane Seymour and the King's marriage to Catherine Parr. This play was all over the place chronologically speaking. Most bizarrely, Cardinal Wolsey was still alive at the end of it! The conventional account of history states that he died in 1530, three years before Anne Boleyn became Queen. Yet in this play he's managing England's affairs during the subsequent reigns of Queen Jane and Queen Catherine. He himself even states that he was responsible for her execution at one point in the play! Thomas Cromwell isn't mentioned once throughout the entire thing either and is nowhere to be seen.

Another odd thing is the fact that Catherine Howard and her beheading don't even get a mention. It just jumps from Jane Seymour to Catherine Parr. Catherine Howard is completely missed out and Anne of Cleves gets just a single line spoken about her. All very strange.
Posted by Neil at 11:58 PM No comments:

This insert is from the painting Thomas More and his Family by Rowland Lockey.
http://en.wikipedia.org/wiki/File:More_famB_1280x-g0.jpg

Does the painting deliberately portray a woman with an extra finger? 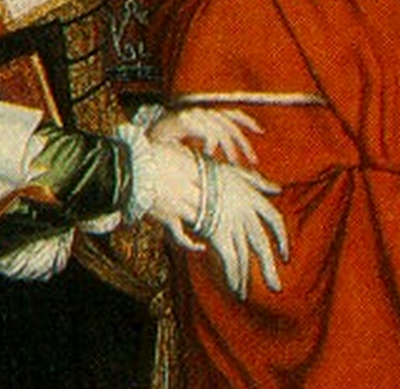 Why Not March Fools' Day?

A belated happy new year to y'all.

At this time of year I always end up musing about the months of the year and why the new year starts where it starts. To be honest I don't get New Year's Eve, it doesn't have the same natural vibe that Christmas has and it always feels like a forced celebration to me. Consequently I always end up arguing with friends and family that it would be much better to have it sometime in spring - the natural beginnings of things.

Looking at the calendar March 1st seems like a natural break point. Apparently March was the first month of the Roman calender and this is said to be why our calender looks so fudged when we contemplate the names of the months. They supposedly had ten months originally and then added January and February later on. Logically, January and February should be the 11th and 12th months, but for some reason they come at the start of our year.

September - septem means seven in Latin yet it's our ninth month
October - octo, eight, yet our tenth month
November - novem, nine, yet our eleventh month
December - decem, ten, yet our twelfth month

Also, to me, the fact that February contains the extra day in a leap year also makes it a more logical twelfth month - it makes sense to add the extra day to the end of the year, rather than at some random intersection between two months.

Anyway, this led me to wonder why not March Fools' Day instead of April Fools' Day. Looking at the conventional explanations for all this calendar mayhem on Wikipedia etc it kind of looks like April Fools' is pretty much a consequence of the new year beginning in March (sometime). Although what with all the various local traditions and the changes from the Julian to the Gregorian calendar it gets pretty confusing. I feel a bit like I've wandered down a rabbit hole.

(The traditional quarter days seem like an interesting thing to look at next. Also the name Gule of August caught my eye - another name for Lammas. Gule - yule?)

Oh and before I forget, going back to the Roman months I've always found it odd that the months of July and August were renamed for Caesar and Augustus. I feel the worship of these two blurs into Christianity somewhat.  Anyway, I was wondering if maybe August shares its root with the Latin word aurum meaning gold. It would be quite fitting for a summer month and also the name Augustus was a title used by many emperors (likewise Augusta for empresses) - maybe it simply meant golden one. An augur in ancient Rome was a religious official or priest.

Also an aureus was a gold coin - so maybe a link to the person depicted on the coin. I think the Latin word chrysos means gold too - Christ? Do Augustus and Christ mean the same thing?
Posted by Neil at 1:57 PM No comments: