In my last post I was discussing the book Space-Perception and the Philosophy of Science by Patrick A. Heelan. This is a follow-on post focusing on one aspect of the book where he mentions the possibility that artists from the past may have tried to incorporate hyperbolic perspective into their artwork.

The most striking example in the book concerns the work of Vincent van Gogh, in particular his painting Bedroom in Arles.

This is the painting in question. 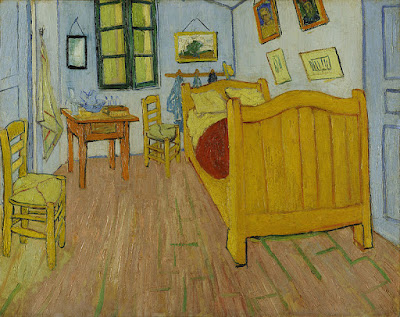 Heelan points out that the painting, instead of following the conventions of standard linear perspective that artists would normally use, actually tries to capture or convey the curved hyperbolic space within which we actually see the world.

Whether Van Gogh was consciously trying to achieve this effect or simply following his own artistic or aesthetic instincts is an issue of contention. However, intentional or not, Heelan provides images that illustrate how this painting differs from how such a room would normally be painted using standard perspective techniques.

The first image (Figure 6.5) shows how the bedroom would be depicted using standard linear perspective. Note the straight regimented box-like structure of the room. 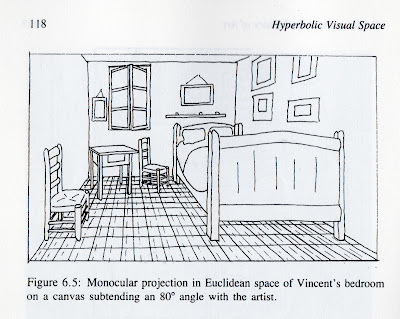 However, in this second image (Figure 6.6) we see Heelan has traced over the Van Gogh painting, showing how radically it differs from the first. Note for example how the bottom edge of the bed at the front of the painting appears to curve. Also note the angle of the walls, and how they appear to form a single curving wall, as oppose to what should be three distinct ones. Likewise note how the seats of the chairs appear to tilt towards the viewer. If you study the image you'll notice many other "distortions" like this. 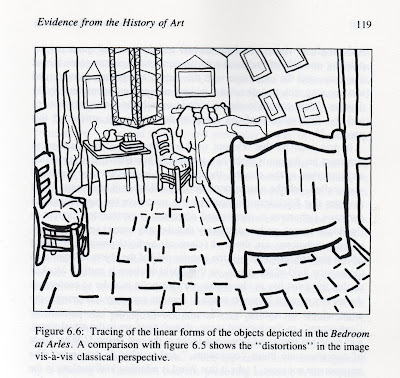 It's a very fascinating thing to take note of, and something I would never have thought to look for in a painting had it not been for this book. I guess the real question then is; does the Van Gogh version look more realistic than the one following the standard conventions of perspective?

Does it more accurately depict what we actually see with our eyes when we stand in the real world and view objects? It's a difficult question to answer.

Of course, the Van Gogh painting wasn't intended as a photo-realistic image. The intention was no doubt more an artistic rendering, an interpretation of reality, so that needs to be taken into account too. However, even photographs can't capture the reality of what we actually see when we're experiencing full 3D reality, and this goes to the heart of the issue, and is why Heelan in his book claims that hyperbolic perspective offers a much better approximation of what we actually see with our eyes than Euclidean renderings can.

For anyone who'd like further information on this topic I recommend the following web page. It's a blog post by an artist called Rob Adams, and it explains the issue of spherical perspective better than anything else I've come across online. It's very easy to understand and explains the problems that can arise when attempting to render what we see in the real world in a 2-dimensional image. He also explains the famous "fish-eye" lens effect in a way that's very concise and easy to understand. I really can't recommend the article more highly.

Anyone familiar with this blog will probably know that I became fascinated with the flat earth topic last year - a fascination which continues. It led me to question many of my previously held assumptions and I've since been trying to understand the world from the ground up - i.e. from a first person perspective. Using evidence from my own eyes and other senses as my primary source of information.

Anyway, inspired by the arguments made by leading flat earthers concerning perspective, I quickly began to realise that much of what we see in the sky follows curved lines of perspective. Just watching airplanes fly overhead, or the passage of the Sun or Moon across the sky shows that they follow curved paths relative to the observer. After searching online I found that the correct name for what I'd been noticing was hyperbolic vision (or hyperbolic perspective). I also came across the following book on Google Books, which I felt compelled to purchase. That was back in about March of this year, and since then I've slowly been worming my way through the book in between other things.

The book is called Space-Perception and the Philosophy of Science by Patrick A. Heelan. 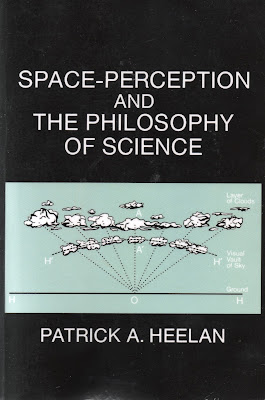 (Some of you au fait with the flat earth renaissance may have already noticed the picture on the cover illustrating how perspective makes clouds appear to slope off to the horizon.)

First a note on the author. Patrick Aidan Heelan was an Irish-American physicist and philosopher of science. He died quite recently in 2015, and was professor of philosophy at Georgetown University. This particular book was published by the University of California Press, Berkeley. Oddly, at least to my mind anyway, he was also a Jesuit priest. Maybe this isn't surprising given his Irish background, but it still seemed a little strange to me. The book is a very academic work, and it wouldn't have led me to think it was the work of a modern day Jesuit had I not read it on his Wikipedia page. In fact, for anyone thinking about reading the book themselves be warned it is very heavy going. I had to reach for the dictionary on quite a few occasions xD There's also a fair bit of maths involved. It's well worth reading and I feel very fortunate to have found it, but it's not a light read by any stretch of the imagination.

The book is mainly focused upon how we interpret the information we receive through our senses and scientific instruments, and the implications this may have regarding our wider scientific philosophies. It also makes the case that hyperbolic vision describes the world we see and experience better than Euclidean geometry does in certain cases.

It would be very difficult for me to do the book justice in a few short paragraphs, and I fear if I try to explain it I may end up misrepresenting the ideas and themes contained within - either through my inability to articulate them, or through my own misunderstanding of them. Like I said, it's quite a heavy going book. So I thought I would make things a little easier by simply sharing some of the images from the book.

This first one seeks to illustrate the way hyperbolic space (i.e. visual perspective) creates a curved image of the actual world. If I'm interpreting it correctly the boxes on the left of the line represent the actual world, and those on the right represent what the observer would actually see. 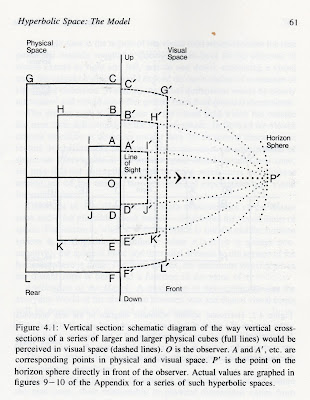 The image may seem a little confusing at first, but once you realise that the horizontal line in the centre (the one with the arrow on it) represents the ground and the person is standing at the centre looking towards "P'" it starts to make a little more sense. It might be easier if you imagine the "boxes" to be very large buildings or structures of some sort - like you're in a huge hall or corridor and the ceiling seems to be sloping to the horizon as it gets further from you.

The next two images should seems a little more straight forward. One shows how the clouds or sky seem to create a dome shape over your head due to these effects of perspective, and the other shows the same effect but looking down at the ground from a balloon, with the ground appearing to curve upwards. 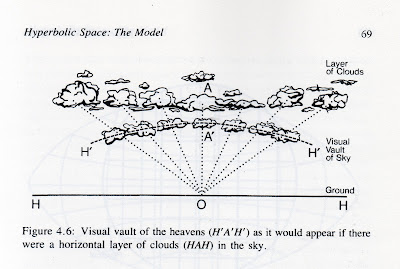 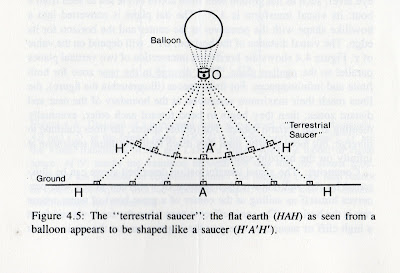 If you can read the text under the second image you may notice it states "the flat earth as seen from a balloon". No doubt the flat earth reference is just pure coincidence, either way though I'm sure you can all make up your own conspiracy theories about Jesuit priests hiding flat earth in plain sight.

I'll leave things there for now. Interestingly, the book also talks about how hyperbolic space may have been utilised by artists such as Vincent van Gogh in the past. This will be the topic of my next blog post. Effectively a "Part 2" to this post.
Posted by Neil at 7:14 PM No comments: