Sex and Swearing in Shakespeare

Over the years as I’ve been working my way through the works of William Shakespeare I’ve came across a lot of passages that are…well, let’s say, risque. Swearing, sauciness, filth, that sort of thing. Very much out of keeping with the Shakespeare we were forced to read and learn about at school. In fact, more akin to Carry On movies, or even the comedy of Peter Cook and Dudley Moore.

Anyway, in this post I thought I’d simply catalogue what I’ve came across so far. 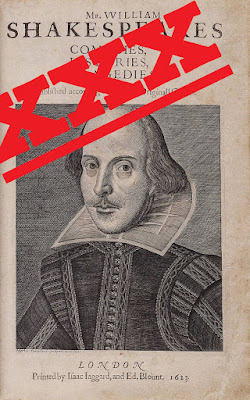 Believe it or not, in the play Twelfth Night, Shakespeare actually makes a joking reference to the word cunt. (My apologies to anyone offended). In the play the character Malvolio speaks the line “these be her very c’s, her u’s, and her t’s, and thus she makes her great p’s” when speaking of a letter supposedly received from the Countess Olivia. The word 'and', between the ‘u’ and the ‘t,’ apparently representing the letter ‘n’ - spelling out the word, C, U, N…you get the picture.

Another reference to the C-word comes in Hamlet, of all places. In this play Hamlet speaks of “country matters” when trying to lay his head down in the lap of Ophelia. A clear pun on the word.

Yet another pun on the word comes in Henry V when Katherine laughs at the word gown because of its similarity to the French word con. It would seems that Shakespeare was quite fond of the word. (Actually, I should point out that thus far I haven’t actually read this play, so I’m not entirely sure about this particular one. When I finally read it I’ll give an update.)

This rather risque passage comes from the play Cymbeline. It concerns the character Cloten who is trying to woo the character Imogen by having music played outside her bed-chamber.

Now onto the Shakespeare Apocrypha - the plays once attributed to William Shakespeare, but now thought to be the work of other writers. A lot of this stuff will have already appeared in my other posts, but I’ll repeat it here as well.

The History of Sir John Oldcastle

This passage from Sir John Oldcastle concerns the servant Harpool, a Constable and a character named Doll, the mistress of a priest. The language is a little opaque but you can’t fail to get the general sense of it.

Harpool. Welcome, sweet Lass, welcome.
Doll. I thank you, good Sir, and Master Constable also.
Harpool. A plump Girl by the Mass, a plump Girl; ha, Doll, ha. Wilt thou forsake the Priest, and go with me, Doll?
Constable. Ah!, well said, Master Harpool, you are a merry old Man i'faith; you will never be old now by the Mack, a pretty Wench indeed.
Harpool. Ye old mad merry Constable, art thou advis'd of that? Ha, well said Doll, fill some Ale here.
Doll (aside). Oh, if I wist this old Priest would not stick to me, by Jove I would ingle this old Serving-man.
Harpool. O you old mad Colt, i'faith I'll ferk you: fill all the pots in the House there.
Constable. Oh! well said, Master Harpool, you are a Heart of Oak when all's done.
Harpool. Ha Doll, thou hast a sweet pair of Lips by the Mass.
Doll. Truly you are a most sweet old Man, as ever I saw; by my Troth, you have a Face able to make any Woman in Love with you.
Harpool. Fill, sweet Doll, I'll drink to thee.

This passage, from one of the comic scenes in the play Locrine, concerns a character named Oliver who tries (with his son William) to force the character Strumbo to marry his daughter. It would seem from the following dialogue that Strumbo already knew her quite well.

Oliver. [...]will you have my Daughter or no?
Strumbo. A very hard question, Neighbour, but I will solve it as I may; what reason have you to demand it of me?
William. Marry Sir, what reason had you when my Sister was in the barn to tumble her upon the Hay, and to fish her Belly?
Strumbo. Mass thou say'st true; well, but would you have me marry her therefore? No, I scorn her, and you, and you: Ay, I scorn you all.
Oliver. You will not have her then?