I decided to read this because I've recently been working on a pet theory - namely that the druids and the Jews were one and the same people. Or, at least, two branches of the same religious/cultural movement. 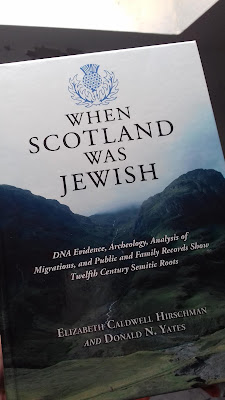 Now I know this may sound like a wacky idea, but there was a cavalcade of little things that set me thinking along these lines. This cavalcade can probably best be viewed on the 'Gael Celtic Hebrew British Coincidence' thread on the Applied Epistemology Library website.

Personally, I really enjoyed this book and felt it contained a lot of useful information. Some of the things that caught my eye in particular were;


"The French Jews, including those of Narbonne, were largely secularized; that is, they had little knowledge of Hebrew or Jewish religious texts."

Also the fact that Scotland had two King Davids - "making it the only country in history, besides ancient Israel, to have a monarch named David."

The book also mentions the fact that the female given name Dhuada "means Davida." Suggesting to me that David is equivalent to Dhuad - a name that looks a lot to me like Druid. In fact, the Welsh name for Saint David is Dewi Sant, again implying that David, Jew and Drui are synonyms.

Another passage that caught my eye was this one;


"Finally, the Celtic scholar John Rhys assembled strong evidence of Hebrew colonization of Britain in ancient times. Ireland was known as Iberion, and the ancient name of the Israelites was Ibri or Iberi, derived from the proper name Eber or Heber, the eponymous ancestor of that people"

Must remind myself to look this guy up.

Also the name Maisie is apparently the "feminine form of Moses."

The book also states that there was a large number of Scotsmen trading in Poland from the Middle Ages onward. This is something I've pondered before. Poland was something of a safe haven for Jews in the Middle Ages. The relationship between Scotland, Poland and Judaism seems something worthy of further consideration. Both Jews and Scotsmen seemed to have a similar reputation as well - trade, commerce, frugality. Both are also noted for banking.

Another passage worth highlighting;


"The Scots and "northern Irish" long clung to their custom of celebrating Easter (Latin Paschua, "Passover") on the same day as the Jews, even after the Synod of Whitby attempted to settle the controversy in 664 C.E."

The book also contains a list of early Jewish names in France and England. I noticed the name Meir, its variants were listed as Melin, Melinus, Merin, Merinus and Meyer. I couldn't help but think the name Merlin. A long shot I know, but it would be nice to go out on a limb and claim Merlin as Jewish. [Incidentally Jewish men were forced to wear pointed hats in Medieval times to identify themselves.]

The list also contained Jewish female names. A few that stood out for their aesthetic quality were Drua, Alemandrina and Licoricia (named after liquorice). Anyone looking for interesting baby names might do well to peruse the list.

All in all the book was well worth reading. I found it both useful and enjoyable. Plenty to think about.
Posted by Neil at 10:01 PM