I recently came across this portrait when I was looking through paintings of European monarchs. 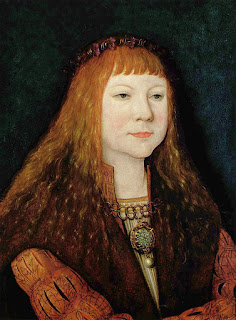 I just assumed it was a painting of a woman, but I subsequently found out that it was of Louis II, King of Hungary. It was painted by Bernhard Strigel and was completed in 1515, a year before the young Louis ascended to the throne. I find it a little odd that a king, or at least potential king, would be portrayed in such a feminine way.

I wonder if there's a potential mystery in this. Incidentally, Louis died in battle at the age of 19. His marriage was childless so he left no immediate successor. There are suggestions that he fathered an illegitimate child though.
Posted by Neil at 7:49 PM