Red Hair and the Reformation

The is something I've been ruminating on for a while now. It's speculation of the worst kind, but it's curious nonetheless, and it's namely this; whenever I look at European history and the great religious divide I also see that divide echoed in hair colour. Or, to put it another way, European history, viewed through a certain lens, can be viewed as Red Hair vs The Catholic Church.

I first noticed this when I was researching red hair and discovered that quite a few of the famous figures from history that came up against the Church of Rome were red-haired. Galileo, Oliver Cromwell, Elizabeth I, not to mention others that were possible or borderline redheads - Robespierre had red/chestnut hair, Martin Luther is portrayed in some paintings with red hair, Henry VIII was possibly red-haired (he must have at least carried the gene for red hair given that he produced red haired offspring). Now it would be ridiculous to suggest that all redheads were pro-reformation, freedom-loving revolutionaries. In fact, quintessential Catholic martyr Mary Queen of Scots was also a redhead - and Henry VIII was hardly a liberal reformer, but still the red-hairedness seemed noticeable to me. 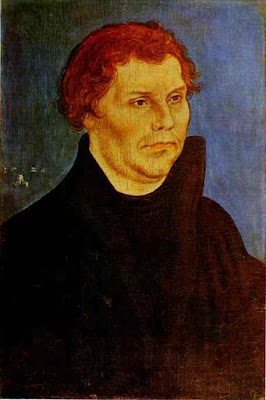 Another thing which got me thinking along these lines was the relationship between Judaism and red hair. As anybody who's read some of my other posts will know I believe that Judaism (or branches and variants of it) were present in northern Europe from the beginning and not just found in the Middle East and the Mediterranean. Just as Phoenician traders travelled to and from Britain in pre-Roman times so too did the cultures and religions.

Anyway, it would seem that from the earliest times Jewishness was associated with red hair in Europe. This is from Wikipedia;


"Red hair is also fairly common amongst the Ashkenazi Jewish populations, possibly because of the influx of European DNA over a period of centuries. In European culture, prior to the 20th century, red hair was often seen as a stereotypically Jewish trait: during the Spanish Inquisition, all those with red hair were identified as Jewish. In Italy, red hair was associated with Italian Jews, and Judas was traditionally depicted as red-haired in Italian and Spanish art."

I often wonder if the Reformation sprang from some collective cultural memory of the northern (Jewish?) Christianity that existed before it was suppressed by the Catholic Church. Another parallel can be seen in the witch hunts that happened across Europe. It's commonly said that red hair was a sign of witchery, in fact I've heard some Internet commentators describe the witch hunts as a genocide against redheads. Interestingly the pointed hats associated with witches and wizards in the popular imagination, bring to mind the pointed hats that medieval Jews were forced to wear to distinguish themselves from non-Jews.

The focus on scriptures and the reverence for the Old Testament is also something characteristic of the Reformation movement which seems markedly Jewish.

Another thing which makes the Reformation seem somewhat ginger to my eyes is the artwork of the Northern Renaissance. Of course, Germany and the Netherlands were hotbeds of reformation and revolution, and the artwork of the time seems to have a particular flavour. Artists like Lucas Cranach the Elder and Albrecht Durer seemed to revel in redness. The fact that orange was adopted as the colour of Protestantism also seems quite apt. Obviously this adoption is due to the Protestant William of Orange and his kin - so named because they held the Principality of Orange in what's now modern day France. I wouldn't contest such well documented history, but still it would be interesting if there was a more esoteric angle to the adoption of the colour.

I also recently read an article that suggested that the 45th parallel acts as a natural boundary for red hair in Europe. The idea being that beneath this line the amount of sunlight makes it disadvantageous to have red hair and that therefore nature selects against it. I can't help but wonder if this line maybe parallels the northern Protestant/southern Catholic divide as well. The big argument against this though is Ireland - possibly the most red-haired country on Earth and historically one of the most Catholic. This seems like a big anomaly to me. Maybe if I can find out why Ireland became so Catholic it'll help me gain more insight into all this.