Conan the Barbarian, the Illuminati and Shape-Shifting Reptiles

Last night I sat up 'til about 2 in the morning watching Conan the Barbarian (the 1982 Schwarzenegger version). It was the first time I'd ever seen this film and it was surprisingly entertaining (although it had me in stitches at times as well). The whole film looked pretty cool, quite iconic actually. My main reason for posting about it though is that I was surprised to see it contained all the elements of the modern pop-culture 'illuminati' mythos. 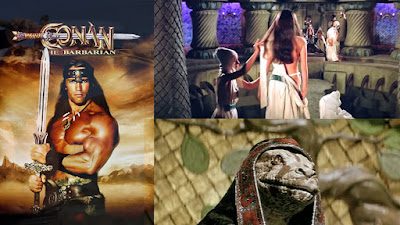 (Conan the Barbarian - stills from the movie) 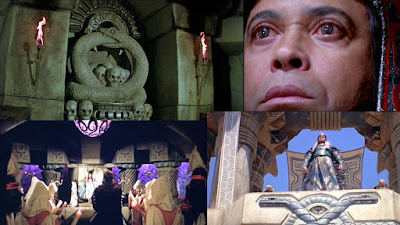 It made me wonder whether this was the subconscious inspiration for David Icke's world view. It was a pretty big movie in the 80's and I'm guessing most people will have watched it. Did it seep into people's minds and inspire a generation? Of course, the alternative view would be that the movie was tapping into a historical vein of truth and that maybe it resonated so well at the time because of this. I guess it's a chicken and egg scenario. Still it's interesting that these themes were so well established in 1982. I'd be interested to see how true the film is to the original Conan fantasy stories created by Robert E. Howard in the 1930's. Were these themes there then as well?

On a parallel note this got me thinking again about our inherent fear of serpents. I think it stems in part from how serpents devour their victims. As humans we seem to be naturally horrified by the idea of being eaten alive. When a big cat kills its prey then eats it, it somehow doesn't seem as horrific as when a bird or a snake simply devours a living creature whole.

I remember watching a nature programme where a baby bird wandered from its mother and subsequently got devoured - whole and alive - by a huge seagull. The image was worse than anything I'd ever seen in any horror movie. Seeing the bulge of a living creature slide down its throat. It actually made me feel depressed for days after it. Even now when I think back I feel a sense of despair. The question is why?

Maybe it has something to do with the fact that as humans we kill animals first before we eat them. We can't digest bones and would choke on them if we tried. So maybe this is partly why we see swallowing animals whole as just plain wrong. And, of course, there's our fear of dying and being killed in general. And being eaten alive must be an especially horrid way to go.

When you see medieval visions of hell, where humans are being boiled, burned and eaten, it's quite often birds or bird-headed men that are doing the eating. Again there's just something inherently more awful about being eaten by a bird or a reptile as opposed to being killed by a lion or tiger. Eating something alive seems in this light to be the very embodiment of evil.

I don't wanna get on my high horse too much, but all my thinking on this does make me relieved that I chose to be a vegetarian. I think if you want to have a positive impact on the world a good place to start is to decide not to eat anything that's conscious of the fact it's being ate.
Posted by Neil at 1:50 PM

Email ThisBlogThis!Share to TwitterShare to FacebookShare to Pinterest
Labels: conspiracy