Just a quick post making a few notes in reference to the consonants. It follows on from the letter [S] post I did not too long ago;
The Letter S - Another Push Consonant
First up, like with the [S] and the [Z] sounds of that last article, it occurred to me that [J] and [Ch] are quite similar. Just as the [S] sound is a [Z] with a push of air so too is the [Ch] sound a [J] with a push of air. (Mouthing these sounds out yourself and noticing the positions of the tongue and the mouth will help if this all seems a little strange).
So this pair can also be added to our list of "push" sounds. 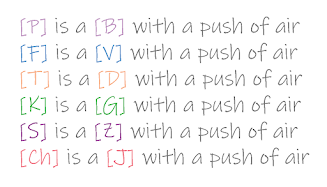 Of course, when developing my stripped back phonetic alphabet I'd removed the [J] altogether. After realising it was essentially a combination of a [T] and a [Y] - that's a [Y] as in the word yeah. So the name John for example, would be rendered Tyohn. Which looks very bizarre, but it essentially gives the same sound. People will argue, no doubt correctly, that there are slight, but important and noticeable differences. Making this a clumsy substitution. However, the aim is to strip things back to represent the basic shapes in the mouth used to make the consonants. Not to split these simple shapes into an infinity of minor variations.
Anyhow, given [J] is now gone [Ch] would have to be written Tyh - the [H] representing the push of air. Quite odd looking xD
..and more mother words
The second thing I want to make note of are some of the eastern words for mother.
Anyone familiar with this blog will be aware of the links between the letter [M] and motherhood. Not only with various words such as mother, maiden, matron, matre, mademoiselle, mamma, mummy ..the list goes on. But also words associated with eating, which perhaps have their origins in breastfeeding. Mammary, milk, mouth. Along with onomatopoeic words such as yummy, mmm, nom, chomp and so forth.
Anyway, I finally got round to checking the words for mother in some of the eastern languages (in European languages the [M] sound for mother seems almost universal).
The fruits were many.
Firstly we have plenty of [M] words in the Indian languages. Courtesy of this very useful Quora page.
Then in Chinese we have;

We also find the [M] in the Korean word for mother;

The only major outlier I've came across so far is Japan. Apparently the word for mother there is the very cutesy haha. ..typical Japan with their cool emojis and text speak :p Though even there the word for daughter has the double [M] sound.

Obviously it goes without saying that I'm quite far out of my depth with all these languages. I'm basically relying on Google Translate and YouTube videos. Still however, it does very much seem like this [M] / mother association is quite common across much of the world.
Finally, as a consequence of all this I was also wondering about the word more. Does that have similar roots? After all, it too is a word children tend to learn very early. When they want more bottle, etc. "More, more, more.."
Posted by Neil at 12:31 PM