Firstly, let's quickly get the backstory of this play out the way. It's said to date from the Elizabethan era and only survives in manuscript form. In the manuscript there are several different handwriting styles. One of which is thought by some researchers to be the hand of William Shakespeare. If this is correct it's the only surviving evidence of Shakespeare's handwriting. Aside from records of his signature.

(Any eagle-eyed readers will immediately spot the first problem with this - they therefore have nothing to compare it with, except the signatures. So as they have no idea what Shakespeare's actual handwriting looked like, nor any contemporary accounts of Shakespeare's involvement, we're once again basing everything on; these few passages read like Shakespeare. --you can probably guess what my thoughts are on this one by now :) 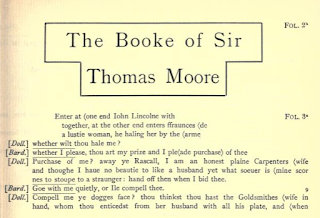 (Sir Thomas Moore,
1911 printed edition, snippet)
Anyway, let's come to my thoughts proper. This was an odd one as it read very differently to all the other works I've read so far. It didn't feel like a work of Shakespeare at all. Of course, even those scholars suggesting he had a hand in it only state that it's those few Shakespeare-written pages that are his, but even those brief parts breezed past me. In fact, to me the entire work read as if it was written by a Victorian school headmaster attempting to write something in the style of Shakespeare.
It reminded me a bit of reading those 19th century journals you come across on Google Books. Gentleman correspondents, raised on Latin and Shakespeare, writing their staid, but perfectly rhyming poems. Each one fancying themselves a minor-master in the amateur dramatics they all no doubt performed in the church hall or village school play.
In the play the character of Thomas More very much has this vibe about him. He's educated and upstanding. Throws around the odd line of Latin. Fancies himself as a poet. Eagerly joins in with the little play within a play that's in the play. It all very much has that feel. As I was reading I actually kept picturing the clergyman from Pride and Prejudice, Mr Collins ..in particular the 90's BBC adaptation. Someone who presents themselves as cultured and knowledgeable, but who comes across as faintly ridiculous. 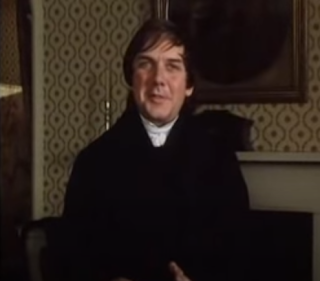 (Mr Collins)
I must admit, whilst reading I did at times wonder if the play had been penned much later, or even if it was an outright forgery because of this later feel. Again, at times it felt almost pastiche. For instance, some of the light comedy in the early part of the play comes from two characters called Doll and Clown. Now there's a Doll in Henry IV, Part 2 (and one in Sir John Oldcastle), and of course there are numerous Clown characters in Shakespeare. So these instantly reminded me of those characters, but the feel was completely different. Even though they were also comic.
Another part that felt slightly anachronistic was a passage where Sir Thomas More chides a ruffian for having long hair. Threatening him with three years prison unless he cuts it off. The implication being if he shortened and tidied his hair he would also tidy up his behaviour too.

MORE. [..] When were you last at barbers? how long time
Have you upon your head worn this shag hair?
[..] it is an odious sight
To see a man thus hairy, thou shalt lie
In Newgate till thy vow and thy three years
Be full expired.—Away with him!

Then after it's been cut.

MORE. Why, now thy face is like an honest man's

Perhaps this association of short hair with orderliness was common in the days of Elizabeth as well, but I couldn't help but ascribe it to the regimented primness of later British centuries.
It wasn't all bad though..
I'm being very harsh with this play aren't I 😄, but I should also state that I did enjoy reading it. As with all these works it was very interesting. Both the beginning and the ending especially so.
The beginning dealt with the Ill May Day riots of 1517 which took place in London, where locals attacked foreign residents. The play seems to deal with this in a fairly balanced way. In it the locals feel that they're suffering because of these "strangers", and that their grievances aren't being heard or addressed.

"LINCOLN. It is hard when Englishmen's patience must be thus jetted on by strangers, and they not dare to revenge their own wrongs."

With some women even being sexually assaulted by the newcomers;

DOLL. Purchase of me! away, ye rascal! I am an honest plain carpenters wife [..] hand off, then, when I bid thee!
BARDE [a foreign Lombard]. Go with me quietly, or I'll compel thee.

So in frustration they riot and attack the foreigners.
However, in the play Thomas More also presents the opposite side of the argument in his attempts to quell the passion.

MORE. [..] Imagine that you see the wretched strangers,
Their babies at their backs and their poor luggage,
Plodding to th' ports and costs for transportation

[..should the King] banish you, whether would you go?
What country, by the nature of your error,
Should give you harbor? go you to France or Flanders,
To any German province, to Spain or Portugal,
Nay, any where that not adheres to England,—
Why, you must needs be strangers: would you be pleased
To find a nation of such barbarous temper,
That, breaking out in hideous violence,
Would not afford you an abode on earth

So this was all quite excellent. Assuming it is indeed from the 16th century it's a fascinating window into that period, and affords a great parallel with today's problems in many ways.
In fact, returning to the question of date, and quite coincidentally given our recent posts, another reference to Julius Caesar building the Tower of London popped up.

MORE. Oh, pardon me!
I will subscribe to go unto the Tower
With all submissive willingness, and thereto add
My bones to strengthen the foundation
Of Julius Caesar's palace.

So this little reference would indeed suggest an earlier dating. Contrariwise to all my previous instincts.
As for the ending of the play it concerned the death of Thomas More, as he headed to the scaffold for not bending his conscience to the will of the king. These parts felt quite well written. I especially liked the numerous little jokes More makes as he nonchalantly faces getting his head axed off.
MORE. [..] I come hither only to be let blood; my doctor here tells me it is good for the headache.
It was effortlessly silly, but also the fact that he was forfeiting his life for his values left its impression. Definitely not Mr Collins from Pride and Prejudice in these last scenes.
Well, not quite anyway.
Posted by Neil at 12:05 AM