If we envision a large island; a random landmass out in the ocean. Then we people it with some blank humans - blank humans as in Chapter One, with no prior culture or history. Then we can imagine what would happen as they populated the island and developed culturally. 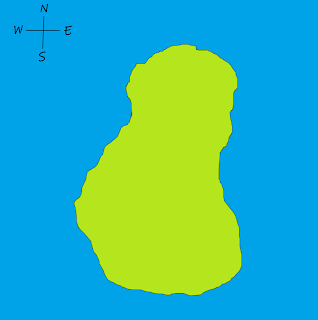 Over time, simply due to the geography of the island, the peoples that have multiplied and spread across this land will come to define themselves in relation to the geography. In this hypothetical example we'll keep things very simple and divide the island between north and south.
The tribes or groups living in the north of the island will naturally refer to those further south as southern, and likewise those in the south will label those to the north as northern. We see this of course in our modern world where place names will often begin with words like east, west, north, etc. North and South Dakota for example. Or words in other languages meaning the same. Similarly we'll talk about the east side and west side of places. Or call people southerners and northerners. On a larger scale we talk about Western civilisation, or the Southern Hemisphere, or the Orient (which means east, or more particularly where the Sun rises -- hence words such as orientation).
Again, it's perfectly natural to do this. The earth, and the Sun's passage across the earth, providing us with a frame of reference for where we ourselves are, and where the other people we encounter are (or where they've came from).
If we return to our simple island example we can imagine how after a period of time the people who populated this island - though originally all from the same stock and sharing the same ancestry - may split into two groups along such lines. A northern group and a southern one. Perhaps with slightly different cultures as well. 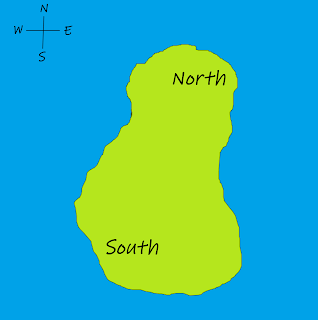 Still though, in such an example the division would remain quite vague. With the people in the middle of the island seamlessly blending both north and south. Perhaps meaning there would be a gradient of soft cultural change, rather than any hard cultural division. Much like how in Britain everyone shares the same culture and speaks English, but the accents and regional differences gradually shift as you move up or down the country.
However ..what would happen if you placed a hard border between north and south? Let's say a very difficult to pass mountain range. 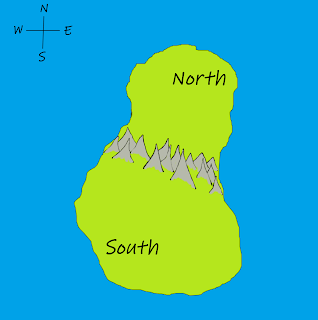 With a hard border separating the two there would be much less interaction. Meaning over a long period of time the two groups of people would diverge much more. The soft regional differences of earlier now becoming hard cultural differences. With mutually indecipherable languages developing to boot.
In effect, our blank humans, spreading out across such a geography would naturally split into two tribes or nations.
This is all fairly obvious stuff of course, and doesn't really need a chapter in a book explaining it. Humans spread out across the Earth; branching off into various races, tribes and language groups, thanks to distance and geography. We all pretty much had the general gist of this already.
By taking the example further though we can also begin to explain other divisions in human society. Divisions that aren't so readily perceived or understood.
In our example the mountains are very difficult to pass. Meaning not many people make this journey. However, there may be some degree of interaction between these two, now separate, nations across the snowy mountains.
So let's fast forward our cultures a little and imagine trade taking place between two cities on either side of the mountains. 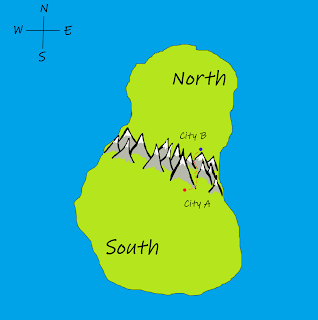 With goods flowing between Cities A and B, and traders travelling back and forth.

Suddenly we now have cultural exchange taking place between these two cities, but still little cultural interaction taking place between the two nations as a whole elsewhere.
With this we can then imagine the different lifestyles a city person and a country person would experience due of this. If we look at the south; someone living out in the country - perhaps a farmer or tribesperson - would largely only experience the southern culture. It's possible they might occasionally meet someone from the north of the island, but quite unlikely. Conversely however, someone living in the city may meet quite a lot of people from north. Traders travelling to the south bringing their goods for example. They may even be a trader themselves, and may have travelled to the north at times. Perhaps even learning the language of the northern people to help facilitate this trade.
So in the cities you will get a cultural blending.
Now it's unlikely a rural person living in the south would ever meet and marry someone from the north, but in the city it would be different. A southern trader may develop ties with traders in the northern city, and as a consequence might end up marrying one of their daughters. Or they may simply meet a native northern girl whilst travelling to, or living in that city. So familial ties will develop between the two cities. Mixing the two cultures or nations.
As a result of this we find ourselves with a natural dichotomy between the largely homogenous countryside and the much more diverse cities.
This dichotomy is somewhat analogous to the dichotomy we see today between globalism and nationalism.
Of course, in our very simple example it's just two separate nations, now linked by two cities. However, in the real world it's much more complex. With many nations, divided to varying degrees by language, culture and geography, linked by numerous towns, cities and other cultural nodes. All evolving over time. The same basic underlying principles apply though.
The difference between city and country gives rise to political differences as well.
As those living in the cities are much more likely to have cultural, familial and economic links that cross national or tribal borders they will naturally have a greater tendency towards favouring the things which increase this. Contrastingly those out in the country are more likely to be invested in ideas which protect the nation or tribe they belong to.
This political divide between nation and inter-nation is much like the divide in politics between left and right. It's both natural and unavoidable. Simply being a consequence of different people having different perspectives due to their personal circumstances. So as with left and right it's good to try to views things from both sides.
There are benefits that come with being at the crossroads between nations, but also negative consequences. By having a foot in two different cultures you get access to, and the benefits of, both cultures. However, there's also the danger that you may be viewed as an outsider by both cultures as well. If in our island example the northern nation went to war with the southern nation (difficult though that would be with a huge mountain range holding the line) there's the possibility that those people of mixed heritage in the cities would be shunned by both sides. Each seeing in the "foreign" ancestry the potential for treachery and disloyalty.
We see countless examples from the real world of this type of interplay. One comparable example is the position of Jewish peoples in European history. Benefitting at times from having ties across national boundaries, but also suffering horrendous consequences because of it. A similar manifestation is multilingual Switzerland, situated like our mountain cities, at the crossroads of Europe, between Italy, Germany and France. Benefitting from this fortunate geography, but also suffering the suspicion that gold and other ill-gotten gains are hidden away in Swiss bank accounts. A slightly different example would be global Britain. As an island situated perfectly for sea trade, and in turn founding trading outposts across the seas. Yet garnering suspicions, perhaps at times justified, that perfidious Albion is setting tribe against tribe in the pursuit of empire.
Again, all these divisions - of a humanity ultimately sharing the same blank heritage - come about naturally. As a consequence of geography, and the circumstances arising from humans interacting upon that geography. Understanding this is key to peacefully negotiating our divisions and differences.
Posted by Neil at 4:23 PM