The Voyages and Travels of Sir John Mandevile 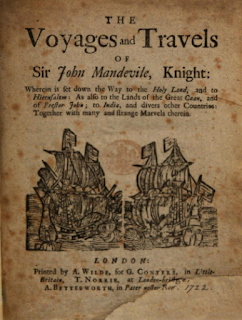 The work was said to have originally been penned in the 14th century, by a knight from St Albans, England, called Sir John Mandevile (or Mandeville). Though the true identity of the writer is contested somewhat. The above copy which I was reading was published in 1722.
As ever I'm always somewhat doubtful about the provenance and dating of these things, but we'll leave all that to one side and just share some of the contents :)
The work primarily reports the various routes a Christian can take to reach the Holy Land. However, after this it then gives accounts from various other far-flung places. Including India, the land of Prester John, and Tartary.
Anyways..
Page 16/17:
On pages 16 and 17 a place somewhere in the region of the eastern Mediterranean called Salathy is mentioned. A story is told of how it was destroyed thanks to a young man who slept with the corpse of his dead girlfriend.

"..all that Country was lost through the Folly of a young Man, who had a fair Damsel whom he loved well, and she died suddenly, and was buried in a Tomb of Marble; and for the great Love he had to her, he went one Night to her Tomb, and opened it, and went and lay by her; and a while afterward returned home again; and when it came to the end of Nine Months, a Voice came to him and said in  this manner .. Go unto the Tomb of the same Woman thou hast lyen by, open it, and view well that which thou hast begotten on her .. And he went and opened the Tomb, and there flew out a Monster very hideous to see, which flew about the City and Country, and soon after the City and Country sunk down."

This was the illustration that accompanied that little tale 😅 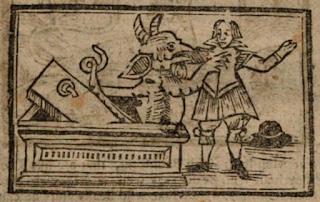 Page 21:
A short little note here. He mentions that locally Egypt is called Canopat, and in another language called Mersine.
Page 28:
Here we get a really beautiful story about a field "that flourished very strangely" near the town of Bethlehem, birthplace of Jesus.

"The cause is, forasmuch as a fair Maiden, that was accused wrongfully, for that she had done Fornication, for which Cause she was doomed to die, and to be burnt in that Place, to which she was led. And as the Wood began to burn about her, she made her Prayer to our Lord, as she was not guilty of that thing, that he would help her, that it might be known to all men, and having thus prayed, she entered the fire, and those Branches that were burning became Red Roses, and those that were not kindled became white Roses, and these were the first Roses that any Man ever saw: And so was the Maiden saved thro' the Grace of God, wherefore that Field is called the Field that God flourished; for that it was full of Roses."

No picture with that one sadly, but I think the words paint it well enough.
Page 29:
A short passage I thought was worth noting:

"The Saracens [Muslims] also eat neither Geese nor Swines Flesh: For they say, it is Brother to a Man"

I note it as I'm always interested in this idea that pigs have some human quality. Winston Churchill supposedly said "I am fond of pigs. Dogs look up to us. Cats look down on us. Pigs treat us as equals."
Page 30:
A picture now. This one illustrates the bible story of Abraham going to sacrifice his son Isaac. I like it as you can see God, in the guise of an angel, holding Abraham's hand back. As if to say "Don't do it. I was only testing you!" 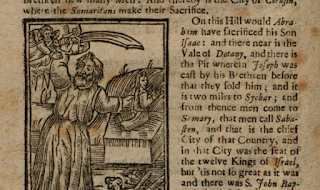 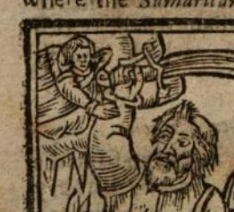 Page 59:
A little note. A city in Tartary is mentioned called Orda. I note it simply as it sounds similar Horde.
Page 74:
Here we have another picture. It's in reference to the fabled 'men with one foot'. These fanciful people appear in many traveller's accounts of the time. Alongside 'dog-headed men', men with just one eye, and men whose faces are in their torso. In fact, I think I have some more pictures later on if I recall correctly. 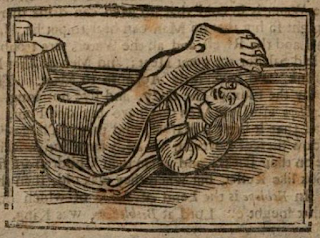 In the image the man is using his giant foot to shield himself from the Sun:

"In Ethiope are such Men that have but one Foot, and they go so fast that it is great marvel, and that is a large Foot, for the shadow thereof covereth the Body from Sun or Rain, when they lie on their Backs; and when their Children are first born, they look like Russet, but when they wax old, then they be all black."

Page 76:
On page 76 when discussing a part of Inde (India), near a river of the same name (which I'm guessing is the Indus that flows through modern day Pakistan), 'green' and 'yellow' people are mentioned.

".. and Men that dwell near that River are of evil colour, yellow and green."

Page 90 ..
On pages 90, 93 and 94 respectively we come to the earlier promised dog-headed, cyclopian and chest-faced men. 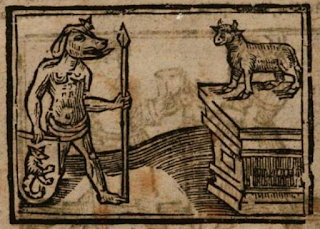 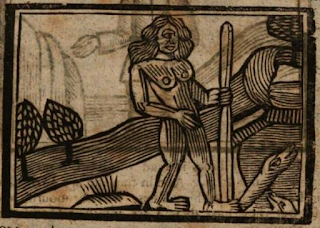 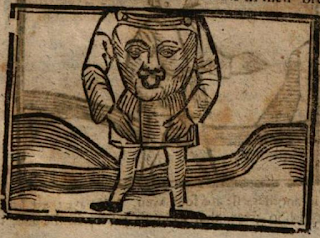 That last one in particular is both amusing and disturbing.
Pages 102 + 103:
On page 102 it's mentioned that the Tartars worshipped owls and the number 9, owning to stories concerning their Great Khan (or Caane as it appears in the text). -- The appearance of an owl saves him when he's hiding from his enemies. Then later a sea parts, creating a path 9 foot wide, allowing him to cross and conquer the land of Cathay.
Then on page 103 it's mentioned that four feasts are celebrated each year because of him. One on the day of his birth. The second celebrating when he was carried to Temple to be circumcised. The third is when one of his idols begins to speak. And the fourth is when his idol begins to do miracles.
Page 117:
Page 117 is a weird one - apple-smelling people.

"There is another Isle that men call Pitan, the men of this land till no Ground, for they eat nothing; and they are small, but not so small as Pigmies. These Men live with the Smell of wild Apples, and when they go far out of the Country they bear Apples with them; for as soon as they lose the Savour of Apples they die"

"And beyond that Valley is a great Isle, where be People as big as Gyants, of 28 Foot long, and have no Cloathing but Beasts Skins that hang on them, they eat no Bread but raw Flesh, and they drink Milk, and have no Houses, and they gladlier eat Man's Flesh than other"

Women with precious stones in their eyes:

"Another Isle there is Northward, where are many evil and foul Women, but have precious Stones in their Eyes, and have such Force that if they behold any Man with Wrath, they slay him with beholding as the Basilisk doth."

And lastly this tale about men specifically giving other men the right of primae noctis over their wives. Due to fears that the women would kill their new husbands (by stinging them with serpents from the body ! ):

"Another Isle is there, of fairer People and good, where the Custom is such, the first night they are wedded, they take a certain man, that is ordained therefore, and let him lie by their Wives to have their Maidenheads, and they give him a great Reward for his Pains, and those men are called Gadlybrien: For men of that Country hold it a great Thing to make a Woman no maiden: And if it be so that the Husband find her a maiden the next night after [..] the Husband shall complain of him to the Lawyers that he has not done his devoir, and he shall be grievously punished and chastised; but after the first night they keep their Wives well, that they speak not with those men.
And I asked what was the Cause why they had that Custom; and they said, heretofore Men lay with their Wives first, and no other, and their Wives had Serpents in their Bodies, and stung their Husbands in the Yard or their Bodies, and so were many Men slain, and therefore they had that Custom to let other Men have their Maidenheads, for fear of death"

Quite the tale.
The work in its entirety can be found here:
https://www.google.co.uk/books/edition/The_Voyages_and_Travels_of_Sir_John_Mand
Posted by Neil at 2:51 AM