I've finally finished reading A New History of England by William Blennerhassett, published 1751. I found and read the first half of it (volumes I and II) a good while back and reviewed it here. I managed to find the rest on Google Books (although I still think I'm missing some, as in the title it says it's a history of England up to the reign of King George I, but it finished at the reign of William and Mary lol). 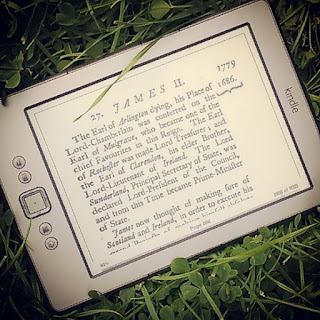 Anyways, ...it was well worth reading and there was plenty worth sharing.

For a start he mentions the travails of Elizabeth I and Robert Devereux, Earl of Essex. Telling the much relayed story of how Essex drew his sword upon the Queen;


"The Queen asking Advice of the Earl of Essex, and the Admiral, concerning a fit person to be sent over Lieutenant of Ireland, discovered an Inclination for Sir William Knowles: But the Earl of Essex, tho' his Nephew, opposed it stoutly, with a View of having that Dignity conferred on Sir George Carew, whom he had a-mind to have removed from Court. But seeing the Queen immovable in her sentiments, he turned his Back upon her with such an Air of Contempt, that she gave him a Box on the Ear. He immediately laid his Hand on his Sword, and being prevented from drawing it by the Admiral, he swore, that he neither could nor would put up so great an Indignity; nor would he have taken it from Henry VIII. himself, were he alive; and directly withdrew from Court[.]"

Essex also found himself in trouble for knighting people whilst in Ireland without the Queen's permission and was later executed for leading a rebellion which would've placed himself on the English throne. When I first read the story of him drawing his sword on the Queen a few years back I immediately thought it seemed like the behaviour of an unruly child challenging his mother. As it turned out there were already numerous theories out there stating just that - that Essex was the Queen's son, his father being her supposed beau Robert Dudley, Earl of Leicester. It would certainly explain his pretensions to the throne. [For more on all this see http://en.wikipedia.org/wiki/Prince_Tudor_theory].

Probably my favourite part of the book was Blennerhassett's coverage of the Stuart period. He essentially paints all four Stuart kings as duplicitous would-be tyrants. This chimes with my general view of the period so I was more than happy reading it.

James I is often viewed by historians as a moderate enlightened King, and more to the point a Protestant King, but Blennerhassett dispels this notion. He gives countless examples of him acting in an absolute way. In fact the troubles of the reign of Charles I according to this clearly began in the James period. I'll give one example of the sort of stuff that was going on (in my Kindle notes I labelled this; 'more evidence that James I was an arse').


"The King not having Patience with the Parliament's Procedure in these things, dissolved them, after they had sit two Months; and afterwards sent several of the Members, who had spoken the most freely, to Prison, without admitting them to Bail. This (says Coke) was the greatest Violation of the Privilege of Parliament that ever was done by any King of England before."

When we finally get to the Civil War of Charles' reign it gets really interesting. I've always felt that the war was about much, much more than religion, and I've always harboured ideas about Cromwell & Co. using religion as a front for a more enlightened sort of change. Blennerhassett puts this in black and white;


"The Presbyterian Party having gained Ground upon the Exclusion of the Bishops and Popish Lords, diligently applied themselves to cherish the Dissention between King and Parliament. There was in the Presbyterian Party another Party, who concealed themselves, and were afterwards known by the Name of Independents. This Party, as they could not accomplish their secret Designs, but amidst Disorder and Confusion, affected a rigid Presbyterianism, and strove to carry Things to Extremities, under colour of maintaining Presbyterianism; tho', in truth, their Intention was, to destroy it as well as the Church of England."

Incidentally, I also discovered that Oliver Cromwell's sister Robina was married to John Wilkins, one of the founding members of the Royal Society. He also wrote works that covered topics such as secret codes and the possibility of life on the Moon. Blennerhassett also mentions that at the time of Cromwell's death there were rumours that he had been poisoned.

Now on to the reign of Charles II - again he's often portrayed as an enlightened King, albeit one with a bit of a reputation for being a playboy. However, in this the impression given is of a King constantly trying to rule by diktat and Divine Right. At times he seems to be at war with the City of London (in fact, the entire Stuart period seems to me to be a constant war between London Capitalists and Catholic Stuarts). The following passage about banking and money lending will have particular resonance for anyone with a conspiratorial mindset. At the time the King was scouting around for new ways to raise capital;


"Sir Thomas Clifford's Invention proved the most lucky; he went to the King, and told him, that by shutting up the Exchequer he would easily raise that and a larger Sum. The King readily understood this Advice; and resolving to make use of it, made good his Promise, and advanced Clifford to the Post of Lord-High-Treasurer. I shall explain the meaning of this. Several monied Men in London, not caring to keep too large Sums in their Houses, put their Money in to the Hands of Bankers and Goldsmiths without Interest. The Bankers and Goldsmiths usually lent this Money to the King at a large Interest, upon the Parliament's Funds; so that, in shutting up the Exchequer, the King received all the Money that came into it without paying it to the Bankers and Goldsmiths; who, having advanced upon this Security to the King already, were deprived of receiving the Money for Repayment as it came into the Exchequer.
By this Usage the Persons who had put Money into Bankers and Goldsmiths Hands were entirely ruined; since it was not in their Power to dispose of their Capital: and their Ruin was the more inevitable, as the Bankers refused even to pay any Notes drawn dayly upon them; on pretence that they received nothing out of the Exchequer. This caused an extreme Consternation in London: But the King and Ministers pursued their own Measures, and, deaf to the Complaints of so many ruined Families, kept the Exchequer shut up one Year; and then, by a new Order, some Months longer: But the Hopes that the Cabal then had, to make the King absolute, made them very easy under the Complaints and Reproaches of the People."

Here's another example of The King vs The City;


"The King brought a Quo Warranto against the City of London, to give an Account how it became a Corporation, and by what Warrant it enjoy'd it's Privileges ...the King wanted a Pretence, from some Violation of the Charter, to seize the Liberties of that great City into his Hands"

Finally I'll end this piece with a little bit of Forteana. The book mentions two accounts of people living to an incredible age.

This Year (1671) died Henry Jenkins, a poor Fisherman of Yorkshire, who lived in the Reigns of eight Kings and Queens of England, aged 169 Years: exceeding the famous Thomas Parr 17 Years.