The book was titled Nostradamus: A Life and Myth by John Hogue. 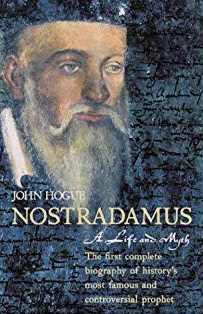 I really enjoyed the book and it contained some fascinating information. As ever though I'm going to leave the reviewing behind and quickly move on to some of the interesting questions the book raised for me.

My first question when reading about the early years of Nostradamus's life was did he actually exist? The evidence for his existence seemingly being a little bit patchy. For example;


Nostradame's father died in early 1547. An examination of a document in the archives of St.-Remy, dated 6 February of that year, lists the heirs of the late notary public. The name of his eldest son, Michel, is inexplicably missing. Were father and son no longer on speaking terms?

Then later this when relating the details of his first marriage;


Finally a marriage was arranged, says Chavigny, to a young Gascon lady "of high estate, very beautiful and very amiable." Strangely enough, neither Nostradamus nor his sympathetic future secretary and biographer make any mention of her name in their writings.

In fact, according to Hogue most the information we have for large parts of Nostradamus's life come from just two sources - the above mentioned Jean-Aymes de Chavigny and Nostradamus's son Cesar de Nostradame. Both published their accounts after his death.

The book is full of incidences like this where factual evidence simply contradicts the narratives of these two biographers. Some muddiness is understandable given that they're writing largely from memory, but the inconsistencies here appear quite considerable.

A large part of Nostradamus's early adult life was apparently spent as a wandering plague-doctor and apothecary. Again the written accounts of this period of his life seem somewhat apocryphal. Take this passage from a work titled Traite des fardemens et confitures about his dealings with plague victims - this was supposedly written by Nostradamus himself;


Among the unforgettable experiences that I actually lived through, one especially stayed in my memory. One day I went to a woman. I called in the window. she covered herself with a death shroud and started sowing it together, starting with the feet. When the undertakers entered the house. they found the woman dead lying in the middle of the house next to her sister. She was just able to sew and cover half of herself in the shroud...

Other passages mention victims going crazy and running amok, dying whilst eating and drinking, and jumping to their death onto cobblestones.

The entire life of Nostradamus seems to be divided into two parts - the early part where he worked as an itinerant doctor, and the later part where he suddenly becomes a visionary soothsayer. The evidence for the first part seems a little sketchy. However, the evidence that there was someone in France publishing under the name Nostradamus during the later part of his life is quite abundant.

My general view is that there was a real Nostradamus that produced almanacs and prophetic quatrains, but that this legend has been added to by countless forgers and writers of fanciful works.

Interestingly, Nostradamus published his quatrains during a turbulent period in French history when Catholics and Protestants were frequently at war with each other. Some people, including England's Sir William Cecil accused him of being a Catholic propagandist. Likewise, some Catholics accused him of being a heretical sorcerer. The possibility that he was being used as an agent to influence the political agenda by one side or another seems a realistic possibility.

Interestingly, Nostradamus referred to Protestants as Jovialists in his writings. This seems interesting as it links Protestantism in with the Pagan revival. Maybe more evidence that the true origins of Protestantism are different to what's generally believed.

Also I came across a an example of the name Rome being rendered as Rosne in the book. That seems like something worth bearing in mind in regards my little etymological wanderings.
Posted by Neil at 3:46 PM