A brief post today. A week or so ago there was a thunderstorm where I live and I noticed that the lightning flashes were red coloured. This was also the case the previous time it thundered, which was about a month or so before that. I don't ever recall seeing red lightning flashes at any previous point in my life, so the fact that the last two thunderstorms have produced them seems a little odd. I thought maybe I'm getting old and that my eyes were deceiving me a little. Anyway, I'm sure it's a perfectly natural weather phenomena, but it seemed worth mentioning on here.

I've had a few brief searches on-line for information but there doesn't seem to be much out there, although there is the odd bit of footage of red lightning on YouTube. There is however a type of lightning called a sprite that occurs high above thunderstorm clouds that has a red colour. Curiously enough, NASA recently released some pictures from the ISS showing these red sprites. 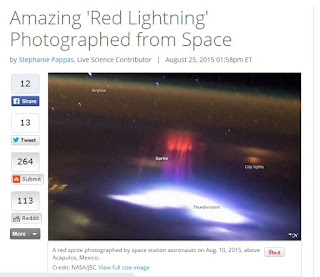 I think these are probably completely unrelated to the red lightning I witnessed, however, what with NASA's record on space fakery, you can never be too sure :p
Posted by Neil at 3:17 PM