Since my last post I've watched a lot of videos on YouTube about Flat Earth. It really is a fascinating subject and it's easy to get lost down the rabbit hole. Anyway, it has inspired me to think about flight and space exploration quite a lot.

Many of the Flat Earth folks point out that a lot of the footage from outer space is faked, and looking at it myself that certainly seems to be the case. It's a pretty big leap to say that therefore the earth is flat, but it certainly opens up a lot of questions. Some even state that the satellites are fake.

In this regard it's interesting to note that Google is using balloons and not satellites to provide internet access to more remote parts of the globe with its Project Loon. I'm sure there must be a perfectly logical reason for this ;) but it's another feather in the cap for Flat Earthers. Once again our old friend Antarctica pops up in relation to all this again too. 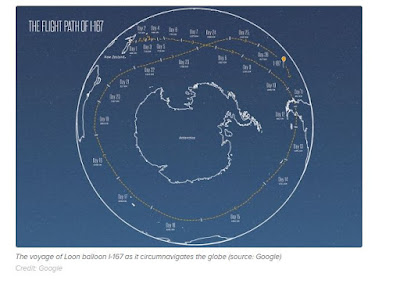 For me though what's interesting is how neglected buoyancy has been when it comes to space and conventional flight. The Hindenburg disaster is the most immediate thing that springs to my mind when thinking about this - I guess it planted the seed in our collective conscious that using helium and hydrogen balloons was something of a technological dead end. The preserve of clowns and novelty modes of flight like the Goodyear Blimp. (A conspiracy theory about how the Hindenburg disaster was faked to discredit this type of technology would be pretty cool right about now :) ).

In fact, it's interesting that the Germans were pioneers in both airships and submarines - both applications of the same principle only in different mediums. Whilst searching for information I also came across the concept of the "vacuum airship" - a ship that uses a vacuum instead of helium or hydrogen, that was first proposed in 1670 by an Italian monk named Francesco Lana de Terzi. 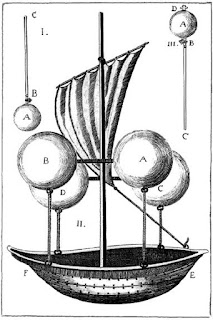 So far a successful vacuum airship has never been produced (or has it??). [On a side note, it's curious to make mention of the famous Roswell; was it a UFO? was it a weather balloon? debate. Maybe it was both.]

I had my mini-epiphany the other night when I was thinking about buoyancy and how it's used in nature. Fish have swim bladders that fill with air to help them rise up and down in the water - when the bladder fills with more air the fish becomes less dense and rises, when it expels air it becomes more dense and sinks. A good example of this effect is when you're lying in the bath; when you breathe in and fill your lungs with air your chest floats on top of the water. It occurred to me that flying birds and insects must also deploy this technology.

How do round little bumble bees and fat little robin redbreasts fly so effortlessly? Normally everyone just focuses on the wings, and from what I've been reading it seems that most commentators assume that air is just used solely for respiration. However, looking at the anatomy of birds and insects there seems to be clear evidence that they utilise buoyancy to very good effect as well.

Birds have air sacs as well as lungs and according to Wikipedia;

While bird lungs are smaller in comparison to mammals, the air sacs account for 15% of the total body volume, compared to 7% lung volume in mammals.

Birds also have hollow bones. Insects too have complex respiratory systems. For example I came across this statement about grasshoppers;


In 1957, Clarke found out that the tracheal system occupies more space in the body, when grasshoppers grow from instar to instar. But air sacs not only develop in the body core! The Harrison lab found that even in the leg, air sacs grew during development and that they took up more space as grasshoppers got larger and older.

Maybe Leonardo da Vinci's dream of flying would have been more possible if he added buoyancy devices to his wing contraptions. Maybe man could fly with artificial wings if we could lower our density to match that of birds and insects (: 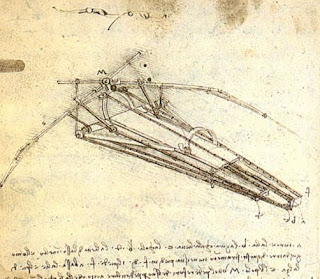