Since I started looking into all this I've came across quite a few interesting maps. I thought I'd share some here.

This first one is a Flat Earth style map from 1715. I don't think the cartographer (Louis Renard) intended to portray the earth as flat, I think it's more a stylistic choice. The world is held up by Hercules, not Atlas. It's said that Hercules held up the world for Atlas while he went to steal the 'Apples of Hesperides'. 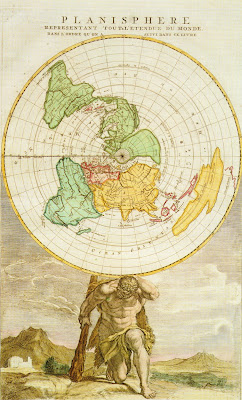 The following map was created by Johannes Ruysch and again shows a disc-shaped earth. Once again though I don't think it was the intention of the mapmaker to convey the idea that the earth is flat. 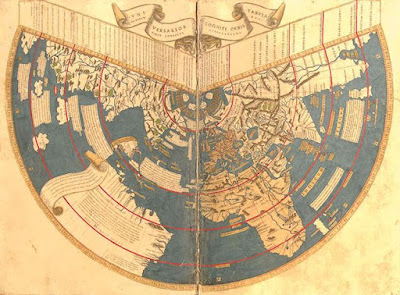 Next up Europe regina. This map shows Europe depicted as a maiden. The cross and orb (which we've mentioned before) is shown as Sicily, and the heart is depicted as Bohemia. Quite a cool map. Sadly though Britain just seems to be floating about above her left shoulder ..just as well really, we never wanted to be part of the Holy Roman Empire anyway :p 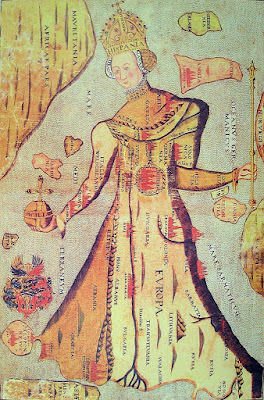 I think this is my favourite though. It's by the cartographer Oronce Finé (1494-1555) and shows a heart-shaped world. The southern, at that time undiscovered, Antarctic/Australian continent is depicted as suitably big. 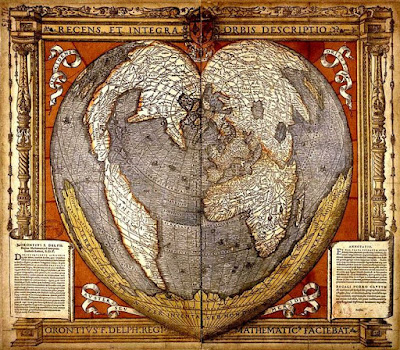