Flat Earth: The History of the Ball Part II - The Earth is an Apple

This one hinges on quite a fortunate coincidence. In my last post I referred to the earth as an apple. This was just a bit of empty poetry on my part, but it seemed quite timely later on when I started looking into the history of the globe - that's the globe as in three-dimensional models of the globe, not the globe. Anyway, it turns out that the oldest surviving globe is the Erdapfel globe produced by Martin Behaim in 1492.

(Martin Behaim and his Globe)

Interestingly, Erdapfel literally translates as "Earth Apple". According to Wikipedia this may relate to the Globus cruciger  - the holy orb topped with a crucifix that is often held by kings and rulers as a symbol of power. In the German language this orb is called the Reichsapfel - meaning "Empire Apple" or "Imperial Apple". 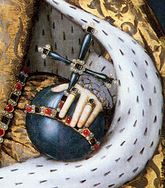 I've actually seen this link between the royal orb and the globe made on some of the Flat Earth videos I've watched, so I guess it isn't anything new. The general theme being that the globe is used as a concept of control. Setting the boundaries of the political domain and the boundaries of our thinking.

I can't help but think of the apple in the Garden of Eden - assuming it was an apple of course. Was Eve given knowledge of the earth being a globe? Was that the secret the serpent whispered? It would be quite fitting come to think of it. A symbolic journey from the flat, godly garden managed by the almighty to the godless, godforsaken wilderness of the infinite universe.

Flat Earth in many ways is the Garden of Eden. A managed finite space, a wildlife sanctuary for God's pet humans. A beautiful place created especially for us. Leaving that world view means stepping into a world that wasn't created for us. A world where we aren't the focus. Where no-one is looking after us, keeping an eye on things.

The apple is knowledge, the globe is knowledge. Now you have that knowledge you're cast out on your own. A lonely lost species on a loose blue marble. Not even sure if up is up and down is down.
Posted by Neil at 11:26 PM