In Part II I mentioned that the oldest extent globe, the Erdapfel, was produced in 1492. Anyway, out of curiosity I thought I'd have a look to see when globes started appearing in paintings. After a brief orbit around Google I've found a few examples. The Elizabethans seemed to be particularly big on globes - quite in sync with Shakespeare's Globe which we mentioned in the last post. Unsurprisingly Francis Drake was often shown in portraits with a globe. 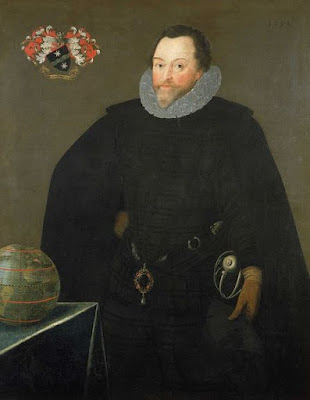 However, the real star was Elizabeth. The following three portraits all show her accompanied by the ball. 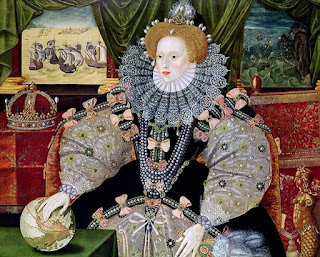 The above is the famous Armada Portrait. The earth takes pride of place out front. The seas and continents just give a general sense of the land masses and don't seem to depict anywhere in particular (I don't think anyway). I'm guessing the general theme conveyed is "I rule all this". 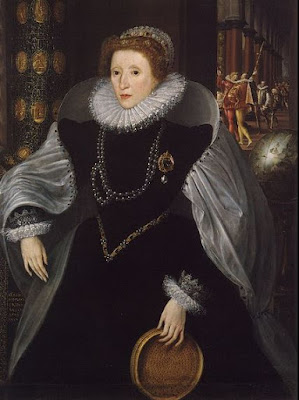 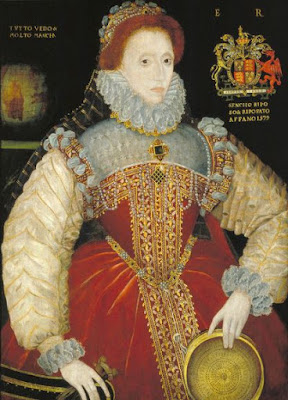 The two similar portraits above are referred to as the Sieve Portraits as they both show Elizabeth holding a sieve - a symbol of chastity. In both paintings the globes are in the background. The inscription in the bottom panel has been translated as "I see all and much is lacking".

There's also a globe depicted in Holbein's famous painting "The Ambassadors". The depiction is quite detailed, as is everything else in the painting. Holbein was active in the first half of the 16th century - contemporary with Elizabeth's father Henry VIII. 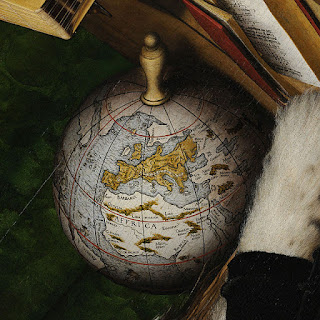 It's said The Ambassadors was painted around 1533. I also found an even earlier depiction of a globe in art - this time in Raphael's The School of Athens. Painted between 1509 and 1511 it shows pretty much every ancient Greek philosopher known at the time - one of which (possibly Ptolemy) holds an earthly globe. 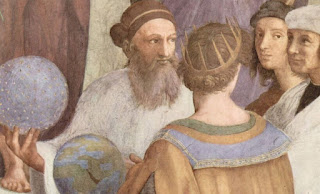 (The School of Athens - Detail)

Given how impressively rendered the two above paintings are I'm tempted to go full-Fomenko and suggest they may be dated too early, but I think that might be pushing my luck a bit. Actually, I'm sure there must be many more depictions of globes in paintings out there, it's probably just my anglo-centric bias that's found the Elizabethan ones first. I'll keep an eye out for any more I come across.
Posted by Neil at 7:38 PM