Kshir Sagar: The Ocean of Milk

More Flat Earth musings. I recently noticed a few posts on Facebook about the Hindu festival of Diwali. Out of interest I had a look on Wikipedia and did a bit of reading up on it and other aspects of Hindu mythology. Of particular interest was Kshir Sagar; the Ocean of Milk.

This was of particular interest to me as I'd already mentioned milk in connection with Flat Earth elsewhere, pointing out the possible etymological links between the Milky Way and Antarctica. The term Milky Way derives from the Hellenistic Greek term galaxías kýklos meaning "milky circle" - Antarctica, on a Flat Earth map of course looks very much like a milky circle. Likewise in Swedish the Milky Way is called Vintergatan meaning "winter road" - linking the two themes even more so.

The Ocean of Milk in Hindu mythology seemingly weaves these themes even further. It's said that in the Hindu (and also Buddhist and Jainist) view of the universe there are seven oceans that separate loka (directional space) from aloka (non-directional space). The Ocean of Milk is said to be the fifth or sixth (accounts seem to vary) from the centre.

It reminds me of playing Super Mario World with levels like Donut Plains and Chocolate Island xD.

Regarding the Ocean of Milk the story goes that at the suggestion of Vishnu the gods and demons churned the ocean to obtain Amrita, the nectar of immortal life. They used the Serpent King Vasuki for a churning string, and for the churning pole they used Mount Mandara placed on the back of a giant tortoise (very FE !). The tale is said to be an allegory for the Milky Way as it turns in the sky above us.

The most interesting thing I found regarding all this however came on the Wikipedia page for the Ocean of Milk.
https://en.wikipedia.org/wiki/Kshir_Sagar

When discussing the Hindu cosmos it stated the following;

Dvipas are islands or continents, Sagaras are oceans. The fact that they're all shown to lie in the Southern Hemisphere really is the clincher that this is a Flat Earth world view. If you read the full page you'll notice the writer(s) trying to present it all as akin to our modern (planet n stars) thinking, they even mention Black Holes in the last paragraph xD, but I think they're projecting their own wishes onto something very much out of step with their own version of reality.

I'll happily steal this image from the Wikipedia page though :p said to show the churning of the ocean of milk. 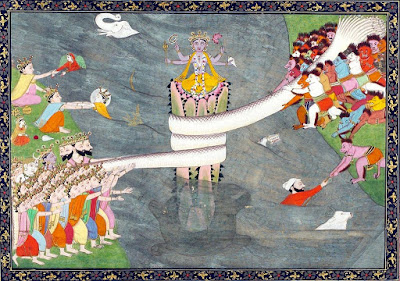