The other day I was dropped off in town after finishing work. It was late-ish, about 8:30 pm and pretty cold. I popped in Tesco and outside there was a homeless guy that had fallen asleep whilst begging - he was still sitting up. It was a pretty harsh sight, but not an uncommon one these days.

A few weeks previously I'd decided to walk home at a similar time rather than wait for the bus (it was quite a mild night for December). It was a Friday and the bars and clubs were heaving, but outside every single one I passed there was at least one homeless person begging. It really was quite bad, and the contrast between the people in the bars having a good time and the people outside on the street was stark. I don't ever recall seeing this sort of homelessness at anytime in the past. I'm sure I can't be the only person noticing it.

I also can't help but contrast it with the Women's March on Washington that has recently taken place. It does seem like white males really have it pretty bad at the moment. Now I'm not saying that women, or non-whites, or any other group you care to mention don't have it bad as well. However, I do always try to gauge what's happening in society by using my own eyes and my own primary evidence, rather than being led by images in the media. And what I see is a lot of white males sleeping rough on the streets. The night I walked home I noticed one homeless white girl and the rest were all white guys. 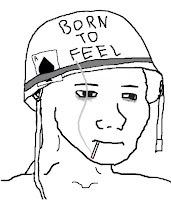 So why is this issue not media worthy? Are white males such a problem that even homeless ones are undeserving of sympathy? Are people blinded even to the very possibility that white males can be victims in our society as well?

I would suggest that it's not deemed media-worthy as it doesn't serve the agendas our elites have planned, but that's another topic. At the moment I just want to simply highlight the issue and point out how unjust it is.

How can we tolerate people sleeping rough on the streets? Especially on nights as cold as these. Surely it's the birthright of all human beings to have a roof over their head. How is this issue being ignored? Why no protests over this?

[I should mention for context that I live in the town of Middlesbrough, in the north of England. From what I've heard secondhand the exact same issue is common to most other towns and cities in the UK.]
Posted by Neil at 2:23 AM