EU by Stealth: How the Mainstream Media are Systematically Destroying UK Parliamentary Democracy

We all hate politicians right. They're just the worst. The biggest crooks. The bane of our lives. If only we didn't have them things would be so much better. Correct?

Well, actually, no. Why do we all hate politicians? - and universally so. Everyone, from left to right, from the most asleep mainstream sheeple to the full on "conspiracy theorists" like myself, we all share this common hatred ..and I think we may all be falling for one of the biggest psy-ops the Media-Intelligence Networks are playing on us. 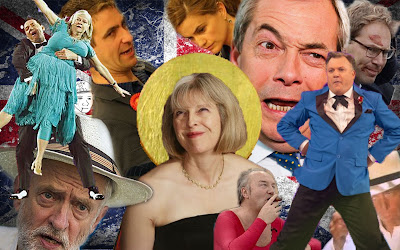 First up we need politicians, we can't have representational democracy without some people filling the role of politician.

Secondly, is it fair to decry all politicians as bad, dishonest and dishonourable? Surely we the electorate should be discerning between the good and the bad politicians; the honest and the dishonest. And if necessary even standing for election ourselves - in which case we would hope that potential voters would judge us on our individual record and not simply revert to the mantra; this person is a politician, therefore this person is de facto bad and deserving of hate.

The successful functioning of democracy depends upon us voters using our judgement and discernment. When we decry all politicians as bad, or wash our hands of the political process altogether we're failing in our duty as citizens.

It's my belief that the mainstream media have played a big part in fomenting this collective apathy we have. So let's look at the many ways in which the media are undermining the political process. (In this article I'm writing from a British perspective, but I'm sure the same or similar applies in most other countries as well.)

One large event in Britain was the MP expenses scandal. Now I can't defend some of the ridiculous things MPs were claiming on their expenses, nor would I want to, however, the collective effect on the public consciousness was to deem all politicians feckless and greedy.

On top of this there are the endless scandals surrounding the fact that MPs often employ members of their own family as aides and secretaries (in fact, in France at the moment many politicians are coming under media scrutiny for this as well). Now again I wouldn't want to defend every instance of this kind of nepotism and I'm sure there have been numerous abuses, however the practise of employing relatives, if lost, will badly damage democracy. It will make individual politicians even more dependant on the state and the media, increasingly less independent, and consequently much worse at representing you.

In order to understand this you have to put yourself in the position of a politician. Let's say you're a decent, honest politician that has entered politics for noble reasons by getting yourself elected. You're something of an outsider and are new to the corridors of power. Now you need a secretary to help you do your job properly, however you need someone you can trust. You can't just put out an advert and hire anyone that walks into your office, you're doing a quite serious job.

Sure, you can get the person vetted by the intelligence agencies, but what if you don't trust the intelligence agencies? What if you're a politician that the state isn't too keen on? You're an individual politician in a complex political world - the only people you can truly trust and rely on are the people that you already know, in particular your close family members and friends. It would make perfect sense to employ these people in some capacity.

If I was a politician I would most definitely employ a family member as my secretary and confidant.

Not to enrich that family member, but because I would want trusted people around me. It would strengthen my position and make me more able to achieve my aims. I know for a fact that I would be weak and vulnerable if I allowed myself to be isolated and alone in the murky world of politics. I certainly wouldn't want to risk having a shill or spy working alongside me managing all my personal and business affairs.

Now however, thanks to the mainstream media, politicians are unable to utilise their own family members. Individual politicians are therefore more isolated and much more easy to pick off by their enemies than otherwise would be the case. They have to be state functionaries now. Professional employees of the state who are expected to act as such. They can't have an individual power base from which to challenge the state itself.

Another way the media continues to undermine the role of the British politician is by constantly denouncing any plans that there may be to increase their pay. In the aftermath of the expenses scandal it was suggested that MPs should have their pay increased - a perfectly logical response. The reasoning being that an adequately paid MP wouldn't need to claim on their expenses. In fact, the general view at the time was that MPs were claiming on their expenses under the impression that they were justified in supplementing their relatively meagre pay packet that way. In effect it was a fudged system where the expenses perks were off-setting the perceived low pay.

Now again, the pay that MPs receive may seem like quite a lot compared to the average pay of a UK worker, however if we value the democratic process we need to pay MPs accordingly. If democracy is important to us then the job they're doing must also be important and worthy of decent pay. They need to be financially comfortable enough to concentrate on that job ..AND they need to be relatively un-'bribe'-able.

Also it must be kept in mind that a politician may only be in their job for a few years  - if they're fearful of losing their job at the next election because of personal financial worries then moral purpose and dedication to duty may take a backseat. Even for relatively honest and decent politicians this may be the case, especially if they have a family to take care of.

The mainstream media also has a habit (in my opinion a deliberate habit) of attacking all honest and independent-minded politicians and giving shill or "career-politicians" an easy ride. Just look at the treatment politicians like Jeremy Corbyn or Nigel Farage get from the media compared to their more scripted colleagues.

The media also gives UK politicians ample opportunity to look like complete idiots. Take Ed Balls and Ann Widdecombe on Strictly Come Dancing for instance. Ed Balls was once one of the stronger figures in the British Labour Party, and he always comes across as one of the more decent ones whenever I read up on the Blair/Brown years (though his wife seems like an Orwellian schoolmarm XD). Now though he's dancing around on TV in spandex. George Galloway meowing around on Big Brother dressed as a cat also springs to mind.

It seems to my eyes that the British Parliament is being systematically undermined by the media, and that any genuine independent voices are being purged from within it.
We really need to start using our discernment, and to start believing in the role of the politician even if not in the politicians themselves.
Posted by Neil at 2:33 AM