The Squirrel King; Or the False Dichotomy of Rent Or Mortgage

[The Rent/Mortgage problem is a topic I've touched upon before on this blog. In this article I attempt to explain it in a way that most people will hopefully understand.

Also, for anyone that's came here via the YouTube video you may want to start further down the page; from the "This Is The Human State" heading.] 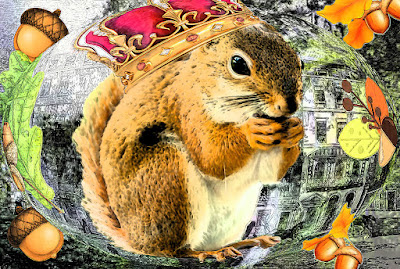 Imagine a squirrel. He just finds a tree and that's it. He has a home. If he doesn't like it he just finds another tree. Simple.

After that all he has to do is find some acorns. To eat, and maybe to put some aside for the winter. Some days he may collect quite a few. Other days not so many. Either way he can relax safe in the knowledge that even if he starts falling behind he can just pick up the pace a bit.

However, imagine he wasn't allowed to just live in the tree. Let's imagine there is a squirrel king or landlord who owns not just his tree, but all the other trees as well. And that in order for our squirrel to live in his tree he has to pay this Squirrel King let's say 5 acorns a day.

What happens if he falls behind? If he has a bad day and finds just 4 acorns. Or finds only 5, but is so hungry he needs to eat a few himself. Then knowing that the next day he needs to find 6 or 7 at least just to get by. Imagine the constant state of anxiety this squirrel would be in.

THIS IS THE HUMAN STATE.

And this is why most humans are in a constant state of anxiety.

Stressed. Depressed and unable to enjoy their existence.

We wake up every day knowing that if we don't find enough acorns to pay the rent this week, then next week we'll be homeless. We need to pay this toll every week just to have some place to exist. We're in a constant state of anxiety because of this. Paying to live, sleep and breathe. Never in a position to relax.

Now we automatically accept that it's normal to pay rent or mortgage every week or month, but is it normal, and does it have to be this way? No other animals live like this. In fact, even primitive human tribal groups and nomads don't live like this. I would say it's highly unnatural - and that it's the number one cause of human misery.

In an ideal world everyone should have their own space to exist. Somewhere to sleep, be, relax. Somewhere that belongs to them, that they don't have to constantly pay another human being for the privilege of using.

Now people may say, we can't simply give everyone a house, and I agree it would obviously be a little impractical to do this at this exact moment in time. However, once everyone recognises the problem we can at least start moving towards the concept.

We could for example make housing much much cheaper. It may sound a little crazy to people so unaccustomed to this way of thinking, but I would say that we should be pushing to make a standard house cost as much as a small car.

A young person should be able to save up for say a year and be able to buy a house outright. Then spend the rest of their life without the constant anxiety and stress of needing to pay rent or mortgage week in week out.

There would also be huge benefits for the government and taxpayer in doing this as well. One of the biggest costs when paying state benefits is the cost of Housing Benefit. If someone is unemployed they will get about £75 a week in Jobseeker's Allowance, yet maybe £120 a week Housing Benefit. If we had a situation where everybody already owned their own home that £120 bill for the taxpayer would disappear.

On top of this, if everyone owned their own home and wasn't constantly spending the larger portion of their income on rent or mortgage it would be much easier for them to save for a rainy day. Just like the squirrel saving his acorns for the winter. So maybe many unemployed people wouldn't even need the £75 a week, as they'd be in a position to put money aside for such periods of unemployment.

Again, this idea of super cheap housing may seem very alien to people. However, in this idea lies the solution that both the right and the left have been looking for ..but have been unable to see due to this false dichotomy of rent or mortgage.

People on the right of the argument tend to believe in home-ownership, but are too wedded to the belief that high house prices are beneficial to make it accessible to everyone. Whereas people on the left see the problem of high house prices, yet think the answer lies in state ownership, or even communism. The real answer lies in universal home-ownership. 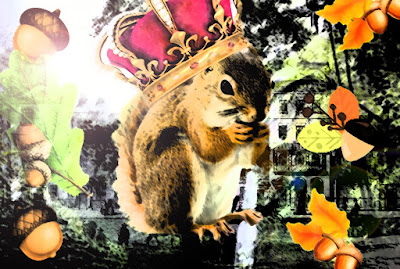 Previous article on the topic; Rent, Mortgage and the Real Origins of Slavery