In this article I'm going to talk about the geographer, politician and writer Sir Halford Mackinder (1861 - 1947). 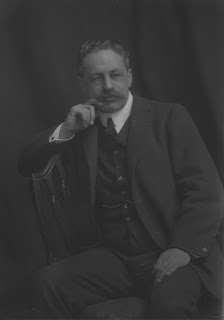 It's largely due to Mackinder that the subject of Geography became a standard academic discipline. Before Mackinder geography generally wasn't taught as a separate subject. It was his zeal and passion for the subject that led to it being afforded its current status.

Reading up on this promotion of geography by Mackinder I found myself becoming a little bit sceptical, and I couldn't help but wonder if geography was specifically lifted to its higher status as part of some effort to promote a certain view of the world to people going through the education system. Of course, this is purely speculation on my part, and it could well be quite unfounded. However, it does occur to me that of all the subjects on the curriculum geography is possibly the least useful and the most speculative (my apologies to any geography teachers that may be reading). Most of the serious stuff seems to already be covered by the other sciences - and what's left is largely big on theory with little actual proof.

For example, geography is generally where we learn about;

Now there are other less contentious topics that are part of the subject, and this is a bit of a selective list on my part. However, it does show that it's the perfect lesson for shaping a person's view of the world they live in. The first five topics on the list are quite controversial, politically charged topics. And the last three, though more in the realms of actual science, are also quite speculative. Do we really know what's deep beneath the Earth's surface? How far down have we actually been? And, of course, Ice Ages and Glaciation overlap quite heavily with 'climate change' science.

In fact, I remember as a child learning about these topics and believing it all wholeheartedly. They were taught as fact, not theory or opinion. I remember learning about things such as acid rain and rising sea levels and being genuinely fearful of the consequences for the world, myself and my family. The fear of doomsday-style catastrophism was imbibed in me quite strongly as I recall. Along with the guilt of being such a profligate drain on the planet and its resources.

Now that I'm older, and have realised that things such as "Climate Change" aren't as cut and dried as they were first presented, it's hard not to see this aspect of my education as little more than propaganda. Now I'm sure my teachers didn't see it this way, and I'm guessing they genuinely believed in what they were teaching - or at least feigned the belief needed to tick the boxes of the school curriculum. Either way though I'm fairly certain it taught me at the time to believe and not to think.

Moving back to Mackinder though, one thing I found which was quite interesting is the following. It's a photograph of a globe which appeared in his book Britain and the British seas (1902). I found the picture very striking at first as it appeared very similar to modern depictions of the globe. It could almost be a black & white NASA picture. 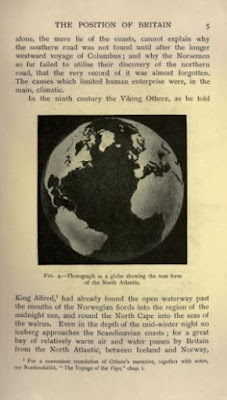 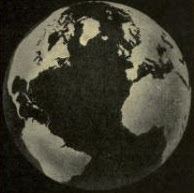 Although it's presumably just a photograph of a model globe, it's been photographed in such a way as to give the impression of something much closer to the reality. It's quite an impressive image. I think I'll dub it the Black & White Marble.

Another interesting fact about Mackinder is that he more or less invented the discipline of geopolitics. He was the originator of a theory called The Geographical Pivot of History. In this theory he states that whoever controls the area of land labelled the Pivot Area (see diagram below), which pretty much seems to approximate to Russia from what I call tell, by extension controls the world. Or the World Island as Mackinder would often label it. He believed that in order to control this Pivot area (now more commonly called the Heartland area) it was first necessary to control the arching corridor surrounding it, sometimes labelled the Inner Crescent. 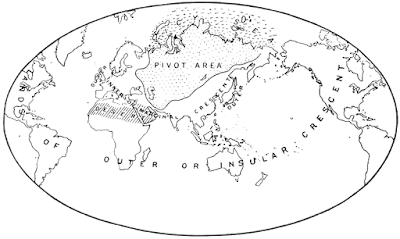 He famously coined the following phrase;

who rules the Heartland commands the World-Island;

who rules the World-Island commands the world."

It was this theory, pioneered by Mackinder, that later led to ideas such as the Global Chessboard, and this fixation with Eurasia we often get from modern geopolitical strategists.

In fact, I first came across Mackinder in a book I recently read titled A History of the World in Twelve Maps by Jerry Brotton. It contains the following comment made following a talk given by Mackinder;

..Mr Spencer Wilkinson, lamented the absence of Cabinet ministers among the audience. They could learn, he suggested, from Mackinder's explanation that 'whereas only half a century ago statesmen played on a few squares of the chess-board of which the remainder was vacant, in the present day the world is an enclosed chess-board, and every movement of the statesman must take account of all the squares in it'.

Anyone familiar with this blog may recall that I've mentioned Russia and the Arctic Seas before. Speculating that there may be modern mysteries lurking there. So it's interesting that the same area of the world was of similar focus in these earlier works.

Finally, I should also mention that Mackinder was something of a believer in the idea that eventually we'd see a single one world government. Though this sort of thinking was de rigueur for progressives at that time, it seems worth making a note of. In fact, it's hard not to see in Mackinder one of the architects of the modern world.
Posted by Neil at 6:46 PM