Quite a lighthearted post today. Last night I watched the movie Waterworld. For those who've never seen it, it's set in a watery future where, thanks to the melting of the polar icecaps, the whole world is now submerged beneath the ocean. What's left of humanity struggling to survive on the ocean's surface, drifting aimlessly on various floating contraptions.

It was also at the time the most expensive movie ever made (it's release came in 1995). It's an odd movie in a way and was generally perceived as a huge flop at the time. Although it's incredibly cheesy, for some reason I've always quite liked it. In fact, I remember years ago, when I was studying music at Middlesbrough College, having a friend who semi-ironically always claimed it was his favourite movie. Whenever he said this I kind of knew what he meant. You can enjoy it on two levels - you can laugh at it, but also get caught up in its epic adventurousness.

When I watched it last night it was the first time I'd seen the film in quite a long while. So I was interested to see if there was anything I'd missed, or that had went over my head, when I'd originally viewed it. In the alternative conspiracist world there's often this notion that truth is hidden in Hollywood movies. With this being the "most expensive ever made" at the time, I thought it would be worth a re-look. Especially with regard to the flat earth/alternative cosmology revival that's taken place online in recent years. This being very much an Earth-themed movie.

Anyway, what caught my eye this time was the tattoo map that figures heavily in movie. This is a tattoo that's found on the back of a young girl, which is thought to be a map showing the way to dry land. In fact, the entire movie revolves around the goodies and baddies fighting for possession of this young girl in order to gain possession of the all-important map.

The map is globe-shaped and contains an arrow pointing to a mountain situated at the top. The tattoo also contains what look like strange Chinese characters. (It can be viewed in the top right hand corner of the first image in this article).

Intrigued, I had a search online and came across the following Cracked article that explains the tattoo (along with a few other tattoos featured in movies).

The article provides a translation of the Chinese characters (plus the one Japanese character also oddly included). They translate as map coordinates. Giving a longitude and a latitude for a specific location on the globe - that location being Mount Everest in the Himalayas. 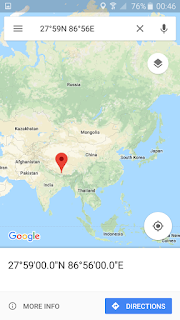 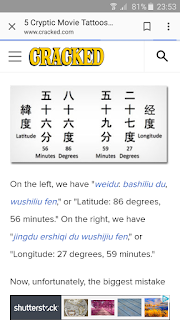 The tattooed map also fails to give directions for the coordinates. Latitude goes from 0 degrees at the equator to 90 degrees at the poles. So 86 degrees could be either 86 degrees north from the equator, or 86 degrees south. Likewise longitude can go east or west from the prime meridian, going up to 180 degrees either way. So the location given could have been any one of four places on the globe.

The Cracked article states that the errors in the map are simply lazy mistakes, which seems completely reasonable given how complicated Chinese characters are for westerners to understand. Plus longitude and latitude are easy concepts to confuse. Plus plus ..it's just a movie.

However, it would be interesting if the mistakes were deliberate as it would mirror another geographical confusion I've mentioned on here before. Namely discussions about the "centre" of the Earth. On the famous flat earth map the centre is the North Pole. (Of course, there is no centre on a globe). However, in other cultures the Himalayas are often seen as the centre of the world. I've noted before the Theosophical obsession with the Himalayas in the 19th and early 20th century.

If we read the coordinates on the tattoo map as they appear, then all four possible locations fall at the poles. Two at the North Pole, and two at the South Pole (86 degrees being very close to the 90 degree north/south coordinate signifying each pole). So once again we have this overlap between the poles and the Himalayas. 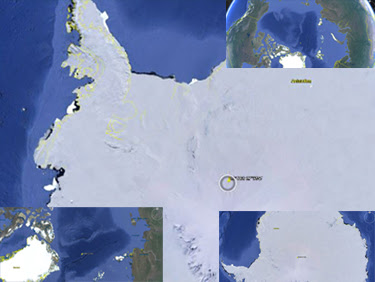