In this series of articles I've been considering the possibility that our stipulated model of the Earth may be incorrect. Is the cosmology we're taught actually right? Is the map of the earth even correct?  ..and if it isn't, why would this not be open knowledge? What's with all the secrecy?

One thing I've been considering is what would happen were it to be discovered that things were not as they first seemed. For example, let's say it's the late 19th century. The Heliocentric model is firmly enshrined as truth. The learned men of the day so confident they have it all worked out that they don't even think to question the fundamental concepts everything rests upon. Now what would happen if some discovery was made that brought this certainty into question? How would people deal with it? Would they even be able to cope with such a groundbreaking shift in perception? Would the leaders that were in charge tell the general public? Would the public be ready or even willing to accept the information being offered? And how would such a message affect society in general?

These thoughts and ideas overlap with something else I've been considering lately. Namely the idea that "conspiracies" - both big and small - far from being impossible or unlikely, are actually inevitable. I'm essentially working on a theory that states that conspiracies, even huge ones, can develop organically. An inevitable output that naturally develops from all the lies, errors and crimes that accumulate over time. So, just as the lies of a single person can often spiral out of control, as small lies get covered up by bigger and bigger lies, and so on and so forth. So too can the lies and errors of an entire social structure accumulate into bigger and bigger fallacies and untruths. Even to the point of reaching absurdity.

So for example, with my model, as one empire rises - let's say the British Empire - an empire of lies or errors will inevitably rise alongside it.

A good example is the Catholic Church. No doubt the Catholic Church originally began as a small movement, centred around a core set of beliefs and ideas. However, as the church grew and got bigger and bigger it became more and more complex. Now when any movement starts growing it becomes increasingly lucrative. It becomes economic. It increasingly becomes a part of the social structure - part of the economy, part of the body politic. Once people become invested in something, either emotionally or economically, it takes on a life of its own. The institution or idea - in this case the church - gets tied up with the personal and economic success of individual people and groups. Its success or failure meaning success or failure for these people, their businesses, organisations and families.

So, let's take the issue of relics. The blood of Christ. A piece of the true cross. The bones of this saint or that saint. As the church grows the market for such items becomes bigger and bigger. People and churches can make money displaying and selling them. So such items are found and displayed. Some may be genuine items - others may be frauds and knockoffs. However, people want to believe, and people also want to make money. So the relics keep being "discovered" and the people keep flocking to see them, and the economy keeps rolling.

Now as this goes on inconsistencies arise. As more and more relics get discovered it reaches a point where some relics contradict other relics. So you may have one church claiming to have found the tomb of, let's say, John the Baptist. Yet another church, in some distant location, may already claim to have the head of John the Baptist on display. With the actual Catholic Church it reached the point where there were countless duplicates of the exact same relic. Proving simply by basic logic that some, if not most, were indeed not relics at all. It was such inconsistencies that helped pave the way for the Reformation.

Now you can imagine a scene in medieval Europe. With one person, starting to get sceptical of what he's expected to believe, stating; "You know what, I don't think these are the bones of John the Baptist". And another guy then replying; "C'mon, so you're saying all the priests in the Catholic Church are part of some vast conspiracy to deceive us?"

Now, of course, in a way the second person is right. There isn't a vast organised conspiracy creating all these fraudulent relics. However, at the same time there kind of is a vast conspiracy. It's just that priests don't need to be told to lie about this or that. Their behaviour is dictated by the economic and social situation they find themselves in. If they're making a living as a priest it's unlikely they're going to rock the boat by biting the hand that feeds them, even if deep down they can see the inconsistencies just as much as everyone else. And if one does have a pang of conscience too strong to keep quiet, then that person will be driven from their profession pretty quickly by other priests that fear the economic repercussions of that one honest priest's actions.

So it just all keeps rolling on for economic and political reasons - the truth takes a back seat to realpolitik. The priests and true-believers have a vested interest in maintaining the system. The King and other aristocrats need their taxes, and therefore the support of the Church - and everyone just plays ball for the sheer practicality of it. Any criticism that does come, generally comes from people outside of the system (or the repressed within it).

So; the institution/social structure develops organically. The errors, lies and criminality likewise develop organically too. And when these errors and problems are challenged the structure defends itself organically.

To me this is similar to what we have with NASA and space exploration today. On the one hand statements are made claiming that we can't get past the Van Allen radiation belt, yet at the same time we're led to believe that man has been to the Moon. An obvious contradiction. An inconsistency that it's easy for someone like me, who's outside the system, to point out. However, people within the system - scientists, teachers, academics, etc - have to simply ignore this and pretend the inconsistency doesn't exist, or if pushed, make some kind of special pleading for it.

Now these people aren't necessarily part of some dark conspiracy. They're just fearful for their jobs, their reputation, the loss of their social status. It's simply not in their practical interest to acknowledge such things. They have bills to pay and families to feed. So the errors and frauds remain and accumulate. Each successive generation paying lip service to more and more error. Or, in the case of true believers, simply taking as fact things for which they have no evidence, or understanding of.

Anyway, I've digressed quite a bit from the original purpose of this article. Which I'll try to get back to - and that is; what would happen if serious evidence came to light challenging the prevailing worldview?

I've been trying to imagine a similar, conceptual situation to envision what could happen. I'm labelling this The Endless Forest. 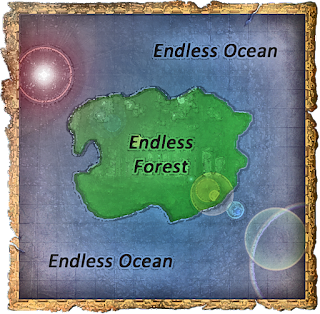 Imagine there's a group of people that live at the centre of a huge, vast continent, situated in a huge and equally vast ocean. Now this continent is completely covered in forest, and is so huge that this group of people have never even reached the coast. No one has seen the seaside or the ocean. It's simply a concept they have no knowledge of. All they know is dense, seemingly unending forest.

Now what worldview would these people have? How would they envision their universe? It wouldn't be hard to imagine, even if we just do so hypothetically, that these people would come to envision their universe as just endless forest. Just as we have a vision of infinite space in mind when we conjure the word universe, they may similarly have a vision of infinite forest when they contemplate the entirety of their reality.

So what would happen if some of these people actually reached the coast and saw the boundless ocean for the very first time? How much of a shock would it be? How much would it shake their worldview? And what response would they get from the people back home when they tried to describe their tale?

Again, I wonder would the majority of people even be told. Let's say these intrepid explorers that have reached the edge of their world island return to their civilisation. I imagine the leaders of their respective community would be the first to speak with them. I imagine these leaders would also find it hard to comprehend what it was they were being told. Would they even believe it without firsthand experience? Imagine how serious it would all seem? What if it contradicted well held religious beliefs? Or contradicted the views of the intelligentsia and the leading class?

Of course, it's possible that every member of society would be allowed to know about this new world-changing discovery straight away, as soon as the explorers returned. However, I think it's also just as likely, if not more likely, that most wouldn't be deemed privy to such knowledge. I base this reasoning simply on my observations of most social hierarchies.

For example, if we look at the most basic - the family. Adults generally withhold a lot of knowledge from their children. Normally with the child's best intentions at heart. If a parent is struggling to pay the mortgage they may keep this information from the child - partly because the child simply isn't in the position to help tackle this problem, but also, more importantly, to save the child from the unnecessary worry that would come with knowing such information. In fact, in the past, a man would often even keep such information from his wife. Again the hierarchy; man > woman > children.

Another example is the workplace. Even in mundane professions such as shop or factory work knowledge hierarchies are easily observed. If there's an event or incident that has took place managers and other higher-ups will often huddle together in the office discussing the important information. Meanwhile the rest of the workforce is left out of the loop on the shop floor, wondering what's going on. Even the dullest of information is often guarded with passion by people invested in the hierarchy they're embedded in. Just think how many times you may have asked a simple question at work only to be told "that doesn't concern you"  - even though the information is often utterly mundane.

So I would guess that something as grand as the realisation that there was something vast and unimaginable beyond the forest would be equally restricted to the upper echelons of the social hierarchy. I would imagine that the people deemed important enough to discuss such things would speak privately about this new information, and make plans for further exploration and research to get a better grasp of what exactly was going on. They would leave the education of the people lower down til a later date. They might not even consider it necessary in the immediate future.

This would be the accidental beginnings of a deception. How long would such a deception continue? And to what lengths would people then go to maintain this deception once it's in full flow and people are fully invested in this new status quo?
Posted by Neil at 10:32 PM