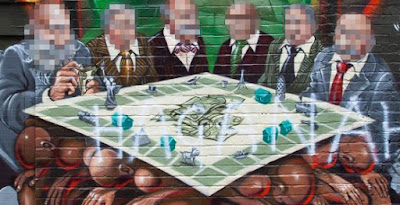 Consider this. I'm British. Britain and British people have an incredible amount of influence in the world. We used to have an empire, we still have a commonwealth (kind of). We have one of the richest economies in the world, meaning that even people who would be considered poor by British standards are comparably wealthy in relation to much of the world's population. The City of London is one of the world's most dominant banking and financial nodes. We have a decent sized military and an intelligence service that has been operating on the world stage since the days of Elizabeth I. In short we have influence, as individuals and when we act collectively.

Now sometimes this influence has been used to serve the interests of Britain or British people in ways that have been detrimental to others. Sometimes even in deeply amoral ways. Other times it's been used for great good. This rightness or wrongness is often a matter of opinion. Consequently there are many opinions about Britain, Britishness and British people in general. There are likewise opinions about individual events that have been the consequence of this British influence.

Some of these views may be quite negative, but they vary. Some people may dislike Britain as a country and its actions, but still have a great fondness for British people. Some may see Britishness and British culture in general as something that has a negative influence on the world, but still nevertheless have no negative feelings towards British people in any sort of racial or hateful sense. There may also be some people at the very extreme end of the spectrum that view all British people as somehow fundamentally bad or evil. Likewise there are people that may have conspiracy theories about Britain or British people, for example the idea that the British royal family secretly rule the world.

There's a world of difference between all these opinions, and it would be incredibly unfair and disingenuous to put someone who dislikes Britain's foreign policy, or aspects of British culture in the same category as someone who has actual racially-driven hatred towards British people. Personally I'm quite happy to hear all these different opinions, even the ones I strongly disagree with. However, imagine if these opinions about Britain and British people were censored or made illegal or taboo in some way.

Imagine, for example, that someone uploads a post to Facebook stating that Britain secretly controls the world, and that post then gets removed from Facebook. How much would that amplify that person's suspicions about Britain? How much would it lend weight to his argument in the eyes of other people? People who previously dismissed him, but now seeing such heavy censorship of his opinion have to reassess their own opinions.

Or imagine a politician talks about "British influence" and is then forced from their position. Or an author writes a negative book about British people which is then removed from Amazon. How would this change the views held by non-British people? I imagine it would have an incredibly negative effect. I certainly wouldn't be happy about people censoring such opinions on my behalf as a British person. Nor would I want to experience the suspicions of other people as a consequence of this.

This is the situation we now have with Jewishness. All human beings have some degree of influence on the world, and all human beings are capable of using that influence in ways that may be deemed good or bad. Jewish people, as individuals and as a group, are in general very successful. It should not be taboo to talk about the influence that they may have on the world. Someone can talk about this influence without having any malice whatsoever towards Jewish people as a race. Just as someone can talk about British influence without it necessarily implying that that person has any racial hatred of British people.

It should not be deemed a crime to notice that there happens to be a lot of people from Jewish backgrounds in a certain profession or strata of society. In fact, it's the very censorship of such talk that leads to the conspiracy theories. For example, there is a preponderance of Oxbridge educated people in British politics, whether we believe this is right or wrong we all agree that this is just a natural consequence of our history and society. However, were it to become taboo to point this fact out then conspiracies would abound ..and there would inevitably be secret Facebook groups, etc discussing this topic and speaking in a detrimental way about all Oxbridge educated people. Maybe with added vitriol stemming from the frustration that they're not allowed to openly talk about it.

It's my opinion that anti-Semitism and the censor of anti-Semitism is a vicious cycle that's moving things in the wrong direction.

Censorship amplifies problems  ...free speech solves problems. It's time we all realised this.
Posted by Neil at 8:55 PM