This follows on from a series of posts I wrote back in 2014 titled Constellation Consonants.

In that series I attempted to strip down the English alphabet from 21 consonants to 12. In part inspired by the notion that there were said to be seven sacred vowels in ancient Greek thought. (The correspondence between 12 and 7 being quite noticeable - for instance, 12 notes in the chromatic music scale, 7 in a key, 12 constellations in the night sky, 7 wandering stars).

The exercise was quite interesting, and in some ways was quite successful. However, there were some sounds that were difficult to represent in such a stripped down language. In this series I'm going to try to address some of these issues.

I'll start by quickly recounting where I left off. 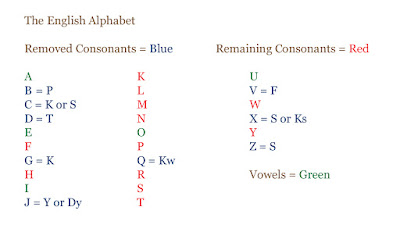 This was how things stood at the end of my final post in that series. 12 consonants remaining, with 9 removed. However, there were several that didn't quite work. Some of which I'll deal with below. 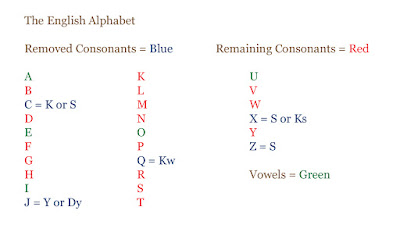 (My reduced alphabet minus the
contentious substitutions)

Firstly, I'll explain the existing substitutions for anyone new to this topic. I removed "C" with the aim of substituting it for either a "K" or an "S". A K in the case of a hard C and an S in the case of a soft C. So, for example;

The word Cat would now be rendered Kat.

And the word Cease would be rendered Sease.

The "J" I replaced with either a "Y" or a "Dy" sound. "Y" in the case of words such as Johann (pronounced "Yo-hann"), and "Dy" for the "J" sound in words like John (it may help if you mouth these sounds out yourself as you read this).

The "Q" sound I replaced with "Kw" - so the word queen would be rendered kween.

Finally, "Z" can be removed and also replaced with an S - the word Zebra therefore becomes Sebra, etc.

Again, these aren't necessarily perfect substitutions, however they do seem perfectly adequate, and are reasonably easy to use.

Now we come to the problematic letter substitutions which I attempted in my first blog series, but which failed to represent the sounds of the English language sufficiently for a seamless transition. These sounds can be grouped into four pairs;


Now if you mouth out each of these letters you'll noticed they're very similar. For instance, if we take "F" and "V" we can see they often overlap. Such as in the case of "leaf" and "leaves". We could easily substitute the "V" in leaves for an "F" and the word would remain almost identical when vocalised. The other three pairs are not quite as similar and interchangeable as "F" and "V", however they are sufficiently similar that they often get misheard or misrepresented.

For example, with "D" and "T" we can see in slang talk how a phrase such as "in the house" can become "in da house". Again if we mouth these letters out we can see how they are sounded in a similar way, using similar parts of the mouth. Try mouthing the letters "t" and "d" ...or "b" and "p". The differences are there, but they are quite subtle.

Now in my previous series I attempted to simply substitute one of these letters for the other. For example; I removed "V" and used "F" in all cases where an "f" sound appeared. So silver became silfer. This substitution seemed reasonable and didn't cause too many problems. However, the other substitutions were much more clumsy and awkward. For example, if we simply substitute "B" for "P" the word bike becomes pike - which of course is quite ridiculous and unworkable.

So, in my previous attempts to strip the consonants down to a core twelve I conceded defeat at this point. Now I'm coming back to the problem to have another go :)

I have a feeling my solution may lie in the consonant "H" - which is a "breathy" sound. Quite a unique consonant in many ways. One which I overlooked in my previous work. I'll attempt to utilise this unique letter in my next post.

Next Up: The Twelve Sacred Consonants; Part 2 - The "Push" Problem Solved