An Island. An Example.

A good long while ago I published an article on this blog about how democracy works in relation to population size - EU Discussion: Limits on the Sizes of Democracies

This post is kind of a follow up, using an example to illustrate some of the other factors that can influence the size and shape of a democracy.

To give a brief overview of the previous article. I essentially stated that democracy is limited by the number of people you can fit into a room. For example, let's say we have a small village of 500 people. Everyone in the village can go to the village hall, express their opinion and vote on any issues arising. Essentially they can represent themselves.

However, once you have more than say 1000 people it becomes effectively impossible to do that. There are only so many people you can fit into a single debating chamber before it becomes difficult for everyone to be heard and to have their say. It becomes impractical. Plus, on top of this, there are only so many hours in a day. So there's simply not enough time to hear everyone speak. Nor time to have thousands of people voting on every single issue of debate.

It's at this point that we need representational democracy, where instead of representing ourselves in a parliament we vote for someone else to represent us on our behalf. This in of itself is a dilution of the democratic process. We no longer get our own personal direct say on every issue. It also may be the case that we end up being represented by a person who doesn't share our particular view. For instance, you may vote for a Labour candidate, but end up being represented by a Conservative one. Still, though it is a dilution of the process, it's nevertheless the only real practical way of making any democracy work ..any democracy that's bigger than village-size that is.

It's much like hiring a lawyer. If you hire someone who can devote all their time to you they will be able to adequately represent you. However, if you're just one of a multitude of clients they may only be able to devote a small fraction of their time to your case.

Of course, in counterbalance to this, there are obvious benefits to being part of a large country or political body as well. Such as the economic and military might that larger countries or unions can call upon. Which may outweigh the fact that you're less well represented politically. Or a smaller fish in a bigger pond so to speak. Also, more politicians per person means more politicians to pay a salary to, and more cost to you the taxpayer. So there are arguments to be made both ways.

Ultimately it's a personal judgement whether you feel the positives outweigh the negatives. The cumulative effect of all these individual judgements in a country then being the ultimate decider on whether things are satisfactory or not. The general feeling or view of the demos.

..I said "brief overview", I may as well have just re-written the whole article again :)

Anyway, onto the article. There are some pictures here, so hopefully it won't be quite as text heavy.

I'll be using the example below to highlight how natural geographic features can help to shape democracies (or countries in general, democratic or otherwise). Placing, like the village hall example, practical limitations on how democracies can function. It's all pretty obvious stuff really, but simple examples can help us to see these simple things a little easier. 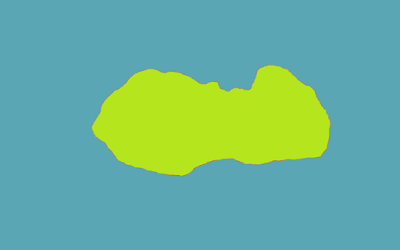 Now on this imaginary island there are 80m people. Who all speak Spanish. Given this situation it would probably make sense for this body of people to govern themselves as a single democracy or country. It would be practical to do this. 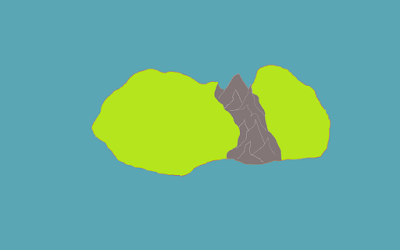 (they're supposed to be mountains)

Now in this situation it would make sense for the Spanish speakers on the one side to govern themselves as their own separate country. And for the French speakers on the other to likewise govern themselves separately. Otherwise it would mean that a parliament on the French side would be governing the Spanish side, or vice versa. With the physical barrier of a mountain range, and also a language barrier, separating government from the governed. Putting practical limitations on the effectiveness of the representation.

Now, of course, this doesn't mean that both groups couldn't exist as a single country or political entity. That's still perfectly possible and realistic. However, it would be reasonable for each side to have self-government if they so wanted it. If they felt the benefits of self-governance outweighed the benefits of being part of the wider political body.

The only way to then decide such a thing would be through the ballot box. A referendum, or some other democratic process, which would discern the will of the people in that particular area. Then set them, in a gradual and orderly way, upon their chosen path.

An example from the real world (apart from the endless Brexit that is) is the Northern Ireland issue. The problem here is that two of these natural factors clash. Looking at the island of Ireland geographically it makes intuitive sense that it should be governed as a single country. I think this is perhaps the main reason why most people removed from the issue sympathise more with those wanting to give Northern Ireland "back to the Irish". When looking at the map, as with the above pre-mountain imaginary island, it just makes sense to see Ireland as a single entity. The political view follows on naturally from the geography.

However, there is also the cultural factor. Which is harder for outsiders to see and understand. The Protestant/Catholic divide, similar to a language divide, which historically and culturally shapes the island. So we have this huge clash.

Once again, the only decent way to proceed is through the ballot box. If the people of Northern Ireland vote to remain separate that must be respected. There is no better or fairer way of deciding. However, democracy never stops. So those on the other side of the argument are free to try to persuade a majority of the Northern Irish people to think otherwise. If one day they succeed any such vote must also be respected.