Cringe - Why It's Such An Apt Word

I haven't done an alphabet post in a while. However, I was thinking about the word cringe, and on reflection it seems like a good topic for discussion. I'm probably not quite young enough to talk about cringe without it being cringe, so hopefully it won't be too bad :) 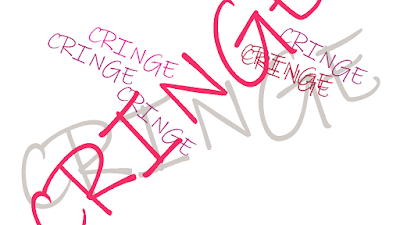 There's also a "J" sound at the end of the word - cr-ingj. Rounding the word off.

So it's like we're drawing ourselves inwards in the mouth when we make the word, as if we're mirroring the overall body movements we make when we actually feel cringe.

I've mentioned the "K/G" consonant before and how it is often found in words associated with being sick. Gag, sick, puck, bork, yak, yuk. It's all quite icky. Which makes sense with the sound being made at the back of the mouth. The "R" sound, the rolling back of the tongue, is quite literally a retreat or pulling back. Then finally, the "ing" sound comes with a similar sense. Being very stuffed up in the mouth, at the back of the nose. In fact, it's the sound we make when we have a bunged up nose. Again, quite icky. You could even perhaps see that final "J" sound, where we put the tongue across the roof of our mouth between the teeth, as a closing off.

So it's the perfect word to describe the pull back in disgust we feel when we witness "cringey" behaviour. This is no doubt why the word feels so right when we use it.

Alternately, when we're confronted with something that we intuitively like, that's the opposite of disgusting, we tend to reach out and open up. When someone brings a cute puppy into the room the reaction is "Awwhhh! so cute!!". Our language reflecting our behaviour in its openness. Big open-mouthed "Ahh" sounds. "Soooo Cuoooooote!". High open-mouthed sounds at the front of our mouth.

So the physical movements we use to make our words in the mouth often reflect, or stem from the actual body movements and feelings we're performing at the time when we're speaking them.
Posted by Neil at 7:53 PM