I'm being a little cheeky here. Obviously there are myriad explanations as to why empires fall. I'm just using this post to highlight one particular problem that will doom all empires sooner or later.

(This post follows on from a post I did earlier this year titled; An Island. An Example, which is worth reading in relation to this. That in turn followed up on my post; EU Discussion: Limits on the Sizes of Democracies. So it's essentially all part of a series really.)

Anyway, if we imagine a continent. Let's say this one that I knocked up earlier. 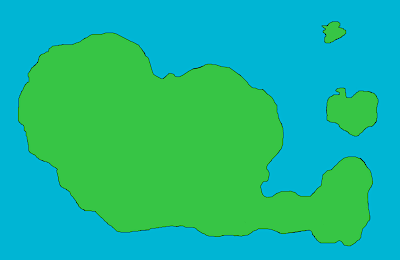 If an empire or country conquers all this territory, and rules from its capital, as depicted below. Then that capital will funnel money, power and people towards it. Almost like a black hole. All the tribute or taxes flow towards this capital. All the big decisions are made here. Meaning in turn that successful and ambitious people will also head in its direction. Further concentrating this power. 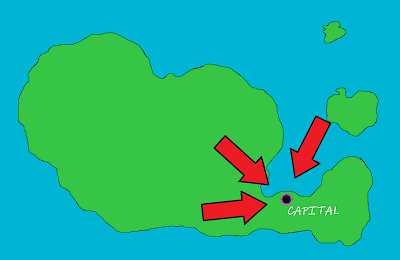 Of course, all these numerous people in the capital will need feeding too. Meaning food will also be funnelled in its direction. Provided, like the taxes, by people living further afield.

This process is something that can easily be seen in all countries and empires. With the capital city always having this same gravitational effect. An easy example is Britain. Where huge amounts of wealth and people are concentrated in and around London. Completely disproportionate to the rest of the country.

Again, this can easily be seen in most modern countries. For instance, people in the north of England or Scotland complaining that Westminster politicians have no idea what life is like where they live.

It's also worth noting here that even good, well-intentioned rulers will struggle to represent truly far flung places. As the distances involved and the sheer number of people place practical limitations. There are only 24 hours in a day. So there's a limit to how many problems a person or government can deal with in that time. No matter how sincerely they may try. (I touch upon this in the two articles mentioned above). 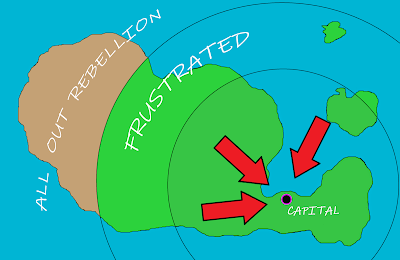 So in my little cartoonish example you can see that the further away from the capital the people are the less happy they are with their situation (and the harder they are to control). Or rather, the bigger the area governed the bigger the imbalance.

This is all pretty obvious stuff of course, and it shouldn't really require a little break down like this to point it all out. However, people often fail to grasp these simple concepts when they're dreaming of their unions, empires and other grand schemes. You can build your empire at great cost, but once you do sooner or later the bits at the extremities will begin falling off. This is no doubt why we see the same pattern of expanding and retracting empires throughout history.

So what's the alternative to empires? In the 'An Island. An example' article linked to previously I try to explain how "countries" form due to natural organic processes. In my opinion the best way to proceed is to respect these natural processes by respecting democratic choices.
Posted by Neil at 12:36 AM