Turtles All The Way Down..

This'll be a nice little fun one hopefully. Concerning the famed "flat earth" idea that the Earth rests on the back of a giant turtle. 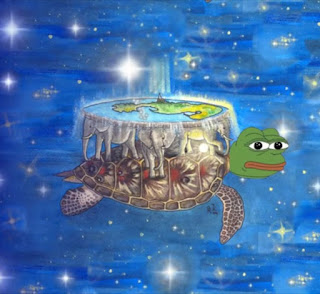 The idea is said to originate in Hindu mythology. The general idea being that the Earth rests on four elephants, who in turn stand on the shell of a giant turtle. However, it's also a common cliché in the west and is often used to ridicule flat earthers and other ideas that employ illogical reasoning.

The story that most often gets repeated goes something like this;

A lecturer giving a scientific presentation about the Earth finishes his speech and then gets accosted by a little old lady who states; "You're wrong, Sir, the Earth rests on the back of a giant turtle".

The lecturer then politely asks; "..but what does the turtle stand on?"

To which the old lady insistently replies; "Another turtle".

He then further questions her; "..but what does this second turtle stand on?"

She then triumphantly answers; "It's no use, Sir, it's turtles all the way down".


Some of the various versions of this story can be found on the following Wikipedia page; https://en.wikipedia.org/wiki/Turtles_all_the_way_down

The first question that always springs to mind whenever I hear this story is how odd it is that a little old lady in the western world would believe such a thing in the first place. Was this a common belief in this part of the world in earlier times? Was she well read up on her eastern mysticism perhaps? Or is it simply a made up story, in part inspired by these eastern ideas, used to conveniently illustrate the ignorance and superstition of unscienced folk?

It's certainly an odd little story.

Etymology of the Two T's

Anyway, returning to the basic idea, what I really find fascinating is the etymology.

"Turtle" and "Tortoise" both contain a double "T" sound. In fact, in many ways they're both just variants of the same word, more or less meaning the same thing.

Curiously, we also have many words containing this double "T" sound denoting places at the edge of the world; Antarctica, Tartaria, Tartarus.

In Greek mythology Tartarus was a place at the edge of the world where souls were tortured after death. Torture is another word containing this double "T" sound and means "to twist" (another word with two t's).

The name turtle/tortoise no doubt simply denotes a shell or shelled creature. Shells, seashells and such, are often twisted too it's perhaps worth noting. The ring-shaped pasta tortellini also springs to mind.

So could it be that this idea of the Earth on the back of a giant turtle is simply a misunderstanding of what was originally meant? Maybe the idea was that we were "in" the turtle shell. After all, a turtle's shell is its home. As shells are for many other creatures. So it's a fitting motif.

Perhaps the idea was originally used as a metaphor for the "outer edge" surrounding the Earth. Hence why we have words conveying this double "T", suggestive of a shell, for places at the edge. When considered this way the idea of a "world turtle shell" doesn't seem quite as silly. It's also very similar to the concept of the "cosmic" or "world egg". Again, another conceptual idea where the world is within a "shell".

It's also thought that the words turtle and tortoise could be related to the name Tartarus. The keepers of Tartarus were called Tartaruchi. According to Wikipedia the Italian and Portuguese word tartaruga (tortoise or turtle) derives from this noun.

The Arctic and Tartaria

A further thing worth relating is the potential overlap between the words Arctic and Tartar (or Tartaria / Grand Tartary). In fact, the Arctic Ocean was often labelled the Tartar Sea on older maps. 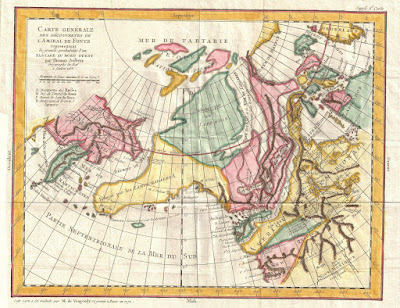 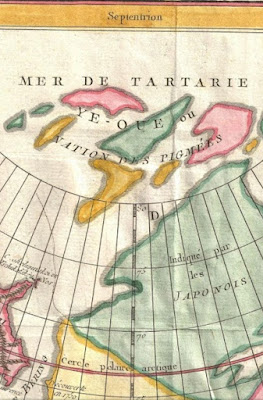 I would imagine part of this confusion is due to the way directions can easily get confused. In this case the directions north and east.

If you travel from Europe to north eastern Russia or Alaska you can go straight east through Russia, or straight north across the North Pole. 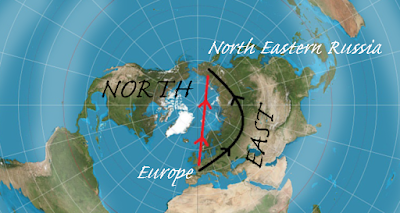 So there's land to the east and land to the north, but it's the same land. It would be easy to imagine how mapmakers, on hearing about land in these directions, could perhaps duplicate this land on their maps. This is maybe why the large area labelled "Tartaria" on older maps disappears so suddenly. It may have been that they overestimated the size of the territory by placing it both to the east and to the north of Europe.

Also, finally (and back to etymology) we have tartar sauce. This is a white coloured sauce normally eaten with seafood dishes. Its name is said to derive from the Tartars. According to Wikipedia;

This name comes from confusion over their allies the Tatars, because of whom the Europeans called Mongolia Tartary. This misnomer came from associating the name Tatar with the Greek mythological hell known as Tartarus.

However, given it's a white sauce perhaps its name also comes because of its similarity in appearance to the snowy Arctic. There's also steak tartare too, which similarly is said to get its name from the Tartars - owing to their fondness for eating raw meat. Again, Eskimo peoples tend to eat raw meat. So the overlaps seem numerous.