Am I A Christian? Am I A Stars Wars Fan?

Another quick one. This time; Christianity through the Stars Wars lens.

I'm a huge fan of Christianity, but I'm a fan of it in much the same way that I'm a fan of Star Wars or the Beatles. I've read the New Testament and I really found it fascinating. Agreed with lots of its tenets, and I took a lot of it to heart. It means something to me. It's now part of my palette of influences. Again, like the Beatles or Star Wars or all the other things I love and identify with.

So, am I a Christian?

..and this is what gets me to the topic of this article.

If you say you're a Christian people assume that you believe in it all literally. That you follow a particular version, and follow that version to the literal letter.

There's no middle ground for people who just like it. Or enjoy it. Or find some value in it in some way or other. People just assume it's either all or nothing. There's a total lack of nuance. 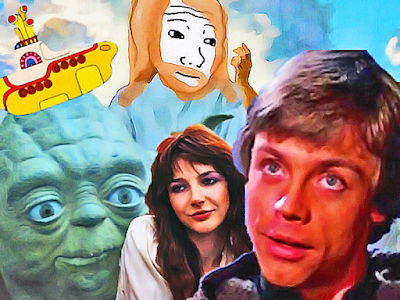 Getting to my Stars Wars comparison I would paint it something like this;

Imagine you have a situation where, in say a thousand years time, you have people who believe that Star Wars really happened. That the Star Wars movies were literally true.

Now if you're just an average Stars Wars fan (who just likes the movies) you may be denounced by these "true believers" as not being a genuine Star Wars fan - even though you love the stories and find real meaning and value in them.

Alternately, when you state that you're a Star Wars fan to people who aren't fans of Star Wars they may just assume you're like the other "literal believers".

"Duh. How stupid do you have to be to believe that people can levitate objects using the force??"

It's a bit of a silly example, but you get the point I'm making. You'd be accosted by ignorant hardliners from either side. Simply for liking something. Very much like it is now with Christianity and many other religions.

If someone sees you reading the Bible they assume you're a literal believer of some description. There's no appreciation that you may be reading it because you find it interesting, or meaningful, or enjoy it in some other way.

"Why are you reading that?" *confused look on the face* "How stupid do you have to be to believe that someone could walk on water??"

Assuming that as you're reading it you must literally believe it verbatim. It's a bit strange really when you think about it. You wouldn't get that with any other content you were consuming.

"What? Why are you listening to that? Duh, do you really believe that there was an actual Yellow Submarine??"

No one would think you literally believed in magic because they saw you reading a Harry Potter book.

Are fans of Harry Potter expected to actually believe in magic by people? Do the real hardcore Beatles fans take all their songs literally? Completely missing all the poetical depth and meaning. It would be a strange world.

A literal interpretation. Be it by literal believers, or by those denouncing something under the belief that it's all meant to be taken literally. Just diminishes the whole thing. I think all the great religions of the world have been diminished greatly by this attitude.

Now, to summarise, I should state that I'm not saying that Christianity is or isn't true. Or that it's as fictional as Star Wars. My personal view is that it's impossible to know for sure what happened hundreds or thousands of years ago from such a removed position, but that ultimately it doesn't matter as if a story has value it has that value either way.

"Judge not lest ye be judged" makes sense regardless who said it or what the origin is.

This is just my personal opinion though, and ultimately it's an individual choice or judgement.

However, I do think that the lack of nuance from both sides means that literal believers miss out because they're overly consumed with concerns and doubts as to whether what they believe is literally true or not. Whereas those on the other side miss out completely as they deem something completely valueless because it isn't one hundred percent true in a literal sense.

(In fact, as I'm finishing this I'm listening to Kate Bush and the song Cloudbusting has just came on. What a song :) Personally I like all these things in a similar way. It's all art. It's all religion. Why can I not like the New Testament in the same way that I like a Kate Bush or Beatles song?