This is a little short one. I've recently been re-evaluating all the phonetic alphabet posts. I think it's time I started to nail it down into some sort of usable form. To start really trialling and playing around with it. So I've finally affixed some symbols to the various vowel sounds.

You may recall that we noted how the ten vowel sounds I'd identified, common to the English language, seemed to correlate rather succinctly with the five vowels in the English alphabet - if you took into consideration both their upper and lower case pronunciations.

I knocked up this little graphic at the time. 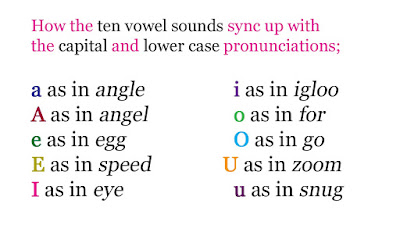 Anyhow, I've decided to stick with this general theme. Keeping the lower case letters as they are, and then representing the upper case sounds with the same letter, only this time accented. 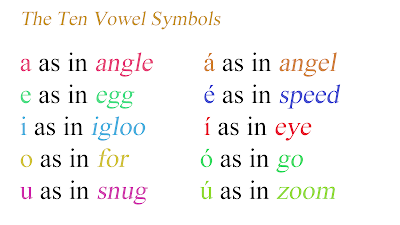 I've decided to use the forward-leaning acute accent to make the distinction just as these are commonly available in other alphabets, and therefore readily available on keyboards. As opposed to creating completely new symbols say. Or choosing more obscure ones.

I've also decided that I'm going to use the following accented [o] symbol for the "th" consonant sound.

I'll do another post with the graphic for the consonants next.

Also it's worth mentioning that for elongated sounds I've decided to just double up the vowels. In an earlier post we mentioned the word first. How we tend not to pronounce the [r] sound as we would a normal [r]. With it instead acting as a marker that the [i] sound (actually more of an "e as in egg" sound really) is lengthened. Without the [r] it would just look like fist though (or fest rather). However, fest becomes "ferst" by lengthening the vowel - f-errrr-st. If you get the drift.

Again, I've had to use the "err" sound with the [r] to illustrate this to people reading who are used to standard English spelling, but really that "err" sound. A sound we often make during speech when we stutter or pause, or can't find the right words. Is actually just a single long vowel sound if you mouth it out.

So for words like first I'll just be using two [e]'s together. Feest. Of course, it looks like it would sound like the word feast with our normal vowel conventions. Like as in the word speed in the above graphic. However, as per the graphic, in my phonetic alphabet that would now be represented by an [é] symbol. So I'll be spelling "feast" as fést.

It's all very confusing :)

I think this doubling up though makes more sense as it's a natural thing to do when illustrating elongated, more sustained sounds. For instance, when we "shush" people at the cinema (not that I would ever do that!), we often spell that out for dramatic effect as something like "Ssssshhhh!". The more S's the more emphasis and exaggeration. Or like when someone screams, "Aaaaaaaahhh!".

We naturally do this when writing to illustrate these vocal exclamations, even though they're not proper words in the conventional sense. It just makes intuitive sense, as that's how they actually sound. An "Aaaaaaaaaahhh!" really is just someone saying an [a] for a really long time.

So I'm going to try to follow that logic.
Posted by Neil at 5:33 PM