The Birth of Merlin - Shakespeare Apocrypha 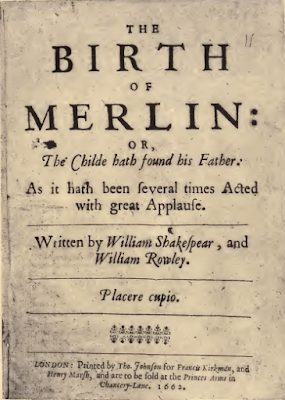 Merlin. [..] and Ile conduct you to a place retir'd,
which I by art have rais'd, call'd Merlins Bower,
there shall you dwell with solitary sighs,
with grones and passions your companions,
to weep away this flesh you have offended with,
and leave all bare unto your aierial soul,
and when you die, I will erect a Monument
upon the verdant Plains of Salisbury,
no King shall have so high a sepulchre,
with pendulous stones that I will hang by art,
where neither Lime nor Mortar shalbe us'd,
a dark Enigma to the memory,
for none shall have the power to number them,
a place that I will hollow for your rest,
Where no Night-hag shall walk, nor Ware-wolf tread,
Where Merlins Mother shall be sepulcher'd.

Lastly, I'll share these few little lines, spoken by the character Artesia, which impressed me with their poetry for some reason;

Artesia. Come, come, you do but flatter, what you term Love, is but a Dream of blood, wakes with enjoying, and with open eyes forgot, contemn'd, and lost.

A PDF version of the 1662 publication can be found here;
The Birth of Merlin (1662)
For anyone wanting a slightly more readable version the text can be found here too;
https://d.lib.rochester.edu/camelot/text/rowley-birth-of-merlin-or-child-hathe-found-father
Posted by Neil at 10:40 PM