The Thorn-Tree: A History of Thorn Worship

I recently read an odd book, titled ‘The Thorn-Tree,’ or to give it it’s full title ‘The Thorn-Tree: Being A History of Thorn Worship, of the Twelve Tribes of Israel, But More Especially of the Lost Tribes and House of David.’ 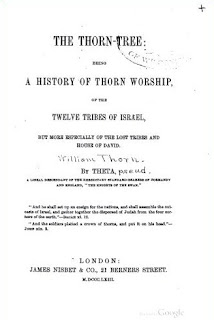 ﻿The book was printed in 1863 and appears to be a pretty esoteric work. For a start, on one of the opening pages appears this quasi-Masonic symbol: 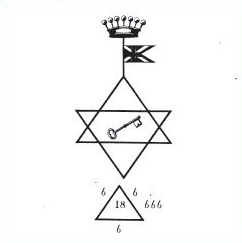 Intriguing. To add to this, the author of the work simply gives his name as Theta. Although on the PDF copy I was reading someone has scrawled in pen ‘William Thorn’ and ‘Pseud’ next to this name.

Anyway, the book basically states that the original name for God was thorn, and that people venerated thorns and thorny plants as a consequence. In particular the rose and the pomegranate, but also other prickly plants like the thistle and the bramble bush. In fact, the author states that the forbidden tree in the Garden of Eden was actually a pomegranate tree. He even links the pomegranate to the rose:

“Thus, then, we find that the pomegranate is thorny, and was called in ancient days the rose.”

I only really came across this book by accident, as I was researching the area where I live - an estate in the English town of Middlesbrough called Thorntree. The area was originally called Thorntree Farm until a housing estate was built on the land, but other than that I don’t really know much else about it. However, the adjacent estate is called Brambles Farm, so thorns seem to be a common theme in the area. The book seemed strangely apt given what I was searching for.
Posted by Neil at 9:22 PM