The Various Names of Roseberry Topping

I recently read a 19th century article titled, ‘On the Danish Element in the Population of Cleveland, Yorkshire.’ It was written by a Reverend named J. C. Atkinson and in it he mentions the various names that have been used for Roseberry Topping over the centuries. He wrote:

I was particularly interested in the last two names, given the book about Thorn Worship that I’d been reading (see previous post). Maybe both these names are corruptions of Thor or Thorn. 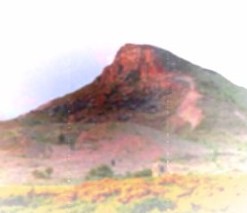