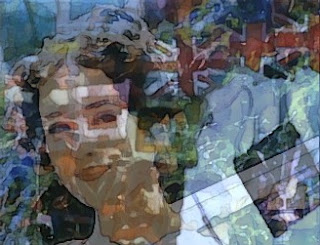 This piece is a combination of collage and computer jiggery. I was going through a bit of a 'British' phase at the time so I used a lot of British imagery. I think it was inspired by all the media coverage at the time about Scottish and Welsh devolution. I started wondering if people would begin to romanticise Britain after its demise the same way they now romanticise Scottish, English and Welsh history. When the British flag ceases to represent a political entity will it come to represent something more mythical, more cultural? I wonder.
Posted by Neil at 10:46 PM

Email ThisBlogThis!Share to TwitterShare to FacebookShare to Pinterest
Labels: art