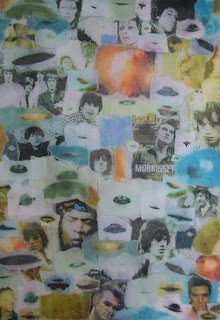 I made this collage a few years back. At the time I was quite interested in the relationship between ufology and rock music. In fact, I’m still amazed that so many famous musicians have had UFO experiences. I'll list a few of my favourites here.

John Lennon saw a UFO outside his New York apartment. He referenced this in his song 'Nobody Told Me' - "there's UFOs over New York and I ain't too surprised."

Happy Monday’s front man Shaun Ryder claimed he was abducted by aliens at the age of 15. Commenting on it in an interview with the Guardian newspaper he said "once they see you, they do keep a check on you."

Elvis Presley believed he’d seen UFOs and met otherworldly beings. He also apparently believed that he himself was from another planet, somewhere in the Orion constellation.

In 1968 Mick Jagger saw a cigar-shaped "mothership" whilst camping in Glastonbury with Marianne Faithful. He also had a UFO detector installed in his home - whatever one of them is. Stones guitarist Keith Richards also claimed to have spotted "a few."

And finally, Smiths lead singer Morrissey claimed to have witnessed a fleet of flying saucers travelling across the sky in a hexagonal formation whilst with a friend. He later said, "The whole thing had an astonishing effect on me."

If anyone else knows of any other rock star UFO stories (or UFO stories concerning any celebrity for that matter) please feel free to add to the list.
Posted by Neil at 10:41 PM