I've just finished reading The Greek Alexander Romance, translated by Richard Stoneman. For those unfamiliar the Alexander Romance is a collection of stories and legends about the famous conqueror Alexander the Great. The collection has had many variants and has appeared in many different languages throughout the ages (this version tries to draw on all of them). 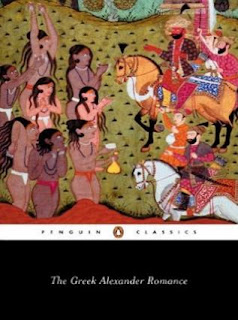 The "real" Alexander was said to have lived in the 4th century BC, and was supposedly tutored by the famous Greek philosopher Aristotle. I've put real in quotes because personally I'm sceptical that there ever was a real Alexander. According to official historians Alexander was a real king, that really did conquer large parts of the ancient world, and that really was tutored by the philosopher Aristotle. The official historians also state that the Alexander Romance is largely mythical nonsense and made-up fairytale stories. In fact, this is why it's called a romance - history books that don't fit official history because they're too outlandish get relabelled as romances. Even though the people who originally wrote and read these stories in bygone times never made such a distinction.

So we have a situation where academics basically pick and choose which pieces of the written record to believe and which not to believe. In this case they're quite happy to believe that Alexander was tutored by the great Aristotle, but not that interested in believing that he had conversations with talking trees (one of the many strange events that occur in the Alexander Romance).

Anyhow, The Greek Alexander Romance was an excellent read and I highly recommend it :) I could spend a full blog post going through all the various interesting tales and ideas within it [in fact, my book is covered in pencil scribbles where I've made little notes about it]. I should also mention how easy it was to read - it was actually an enjoyable experience, unlike say, Homer's Iliad which I found a real test of endurance. I can totally see why these tales about Alexander were so popular in medieval times, and why they appeared in so many variations and languages.

Finally though I'll get to the Flat Earth/Ball Earth bits.

The book contains one bit where it implicitly states that the Earth is round, then many other bits where it's implied that it's flat and has edges. I guess this is to be expected given that it's a composite of various tales and traditions.

The mention of the Earth being round comes in a passage where the Persian king Darius mocks Alexander by sending him a ball (thus implying that Alexander is a child and should still be playing with toys). Alexander replies with the following statement;


I accepted the ball, as a sign that I shall be ruler of the world - for the world is spherical like a ball.

This implies that whoever wrote this section of the story (assuming the story being relayed isn't actually true of course) believed that the Earth was round. This would suggest that there were people that believed the Earth was round at least as early as the medieval period. It's just then a case of how old or authentic you believe these texts to actually be [I've mentioned my general scepticism about the dating of texts in other posts on here before].

The parts of the text that imply that the Earth is flat are much less clear, but they nevertheless conflict with the above passage. There are constant references to Alexander trying to reach the edge of the world - of course, this could be taken in a more symbolic sense though. There's also a passage where Alexander is carried high into the sky by a large bird and sees the entire world;


"Look down on earth, Alexander!" I looked down, somewhat afraid, and behold, I saw a great snake curled up, and in the middle of the snake a tiny circle like a threshing-floor [a threshing floor is a floor, normally circular, that was used to separate out grain by the trampling of feet in days of yore]. Then my companion said to me, "Point your spear at the threshing-floor, for that is the world. The snake is the sea that surrounds the world."

This visual image would imply that the world is a disc of land on a vast ocean, but again I guess it could be open to interpretation. (On a side note doesn't it often feel like we're the grain. Maybe a threshing floor is quite an apt description.)

Another thing that caught my eye that maybe could relate to flat earth thinking came when Alexander met the Brahmins or naked philosophers of India. He asked them several questions, one of which was "Which is stronger, death or life?" They replied "Life, because the sun as it rises has strong, bright rays, but when it sets, appears to be weaker."

I thought this was quite an odd statement, but it did bring to mind how instantly the morning light seems to come upon us, and how gradually the daylight seems to fade in the evening. Evening is in between morning and night, but what's in between night and morning? I'm sure this is just a question of perception, after all we're normally tucked up in bed in the early hours of the morning, so we rarely experience the true break of dawn, but I thought it was an interesting thing to make note of.

A final thing I thought was worth mentioning concerned the continents of the world, and came in a bit about Alexander taking on the Amazons - the famed female warriors of Greek myth. Mention of the name Amazon of course makes most people think of the Amazon river in South America, however we're told by historians that these ancient Amazons dwelt somewhere completely different. This would obviously make complete sense given that the New World was only discovered by Europeans about 500 years ago - long after the ancient Amazons were said to exist. In fact, if I recall correctly I think one story goes that the Amazon river was so named by European explorers because they encountered vicious female warriors along the river - which reminded them of the Greek tales.

However, setting conventional history aside for a moment, it's interesting to note how the country of the Amazons is described in the Alexander Romance.


We live in the hinterland across the river Amazon. Our country is completely encircled by a river, and it takes a year to travel around it. There is only one entrance.

If you take encircled by a river to mean encircled by an ocean then this would be a pretty decent description of the South American continent. A year to travel around it would certainly suggest a landmass of continent size. The one entrance possibly being the Isthmus of Panama in middle America. In fact, somewhat coincidentally, the Isthmus of Panama is also known as the Isthmus of Darien - and the name Darien is said to derive from the Persian name Darius. As mentioned above Darius is the Persian king that Alexander spends much of his time at war with in the book.

The possible Amazon/South America link is strengthened in a later passage in the book where Alexander tells the Amazons;


We have made ourself lord of the three continents and we have not failed to set up trophies of all our victories. It would be seen as shameful in us if we did not campaign against you too.

With the three already conquered continents being Africa, Europe and Asia this would suggest that the land of the Amazons lies somewhere else. Again though this is pretty heady speculation and I guess the text can be read numerous ways. Especially given that we're reading a translation of a work that has had so many variations down the years.

It's still highly interesting though. Maybe all these works we attribute to the ancient and medieval world are much more recent than we think. I'm slowly becoming convinced that the official history we have of the world is very confused indeed.
Posted by Neil at 12:14 AM