This all started with some speculation with a friend about a building in my home town of Middlesbrough. The building concerned was the old synagogue near Albert Park. The building is not in use as a synagogue anymore and has now been converted into apartments. The building is named Lugs Lodge and has a big 33 above the door (it being house no.33 on the road). 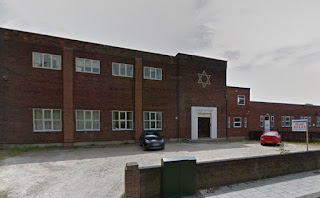 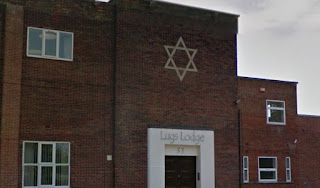 Having read lots of books about conspiracy theories and Freemasons controlling the world the name Lugs Lodge, along with the big 33, used to fascinate me no end. And I often wondered what the building was for and why it was so named. When I discovered it was simply a bunch of flats or apartments it seemed a little more mundane than I had imagined.

The fact that it used to be a synagogue also interested me as well. It seems odd that there was once a flourishing Jewish community in Middlesbrough that has since dwindled away. There's also a small Jewish cemetery in town, which again has always seemed a little poignant and enigmatic to me.

Anyhow, after recently speaking with a friend about the building I decided to look up the name Lug to see if there was a meaning to it (of course, it could simply be the name, or nickname, of the person who owns the apartment block, but that would be way too boring).

I found that the name Lug, or Lugh, is the name of an Irish deity, depicted in texts as a hero or high-king. The etymology of the name was particularly intriguing. According to Wikipedia it either means light or oath - both quite fitting masonic motifs.

"Lugh's name has been interpreted as deriving from the Proto-Indo-European root *leuk-, "flashing light", and he is often surrounded by solar imagery, so from Victorian times he has often been considered a sun god, similar to the Greco-Roman Apollo though historically he is only ever equated with Mercury."

"Juliette Wood interprets Lugh's name as deriving from the Celtic root *lugios, "oath", and the Irish word lugh connotes ideas of "blasphemy, cussing, lies, bond, joint, binding oath", which strengthens the identification with Mercury, who was, among other attributes, a god of contracts."

Reading up on Lugh also led me to read up on the Tuatha Dé Danann - the supernatural tribe from Irish mythology that Lugh was said to descend from.

The Tuatha Dé Danann often pop up in relation to conspiracies on-line. What struck me though was the Tu sound at the beginning of the name. I've mentioned this sound on here before, and how it seems to pop up in history again and again. Jew, Dieu, Jutes, Teu(-tonic), Tudors, Tiw (pronounced Tu) - the god from which we get the name Tuesday. I've even linked it to the words Druid and David.

I read all these names to essentially mean god or godly people. So it was something of a reaffirmation to read the etymology of the name Tuatha Dé Danann on Wikipedia.


"The Old Irish word tuath (plural tuatha) means "people, tribe, nation"; dé is the genitive case of día and, depending on context, can mean "god, gods, goddess" or more broadly "supernatural being, object of worship""

The dé/dia part of the name also chimes quite well. Similar to the French Dieu, the Spanish Dios also means god. (The name Tudor is said to be a Welsh variation on the Greek Theo or Theodore, again meaning god.) In fact, all these names seem to just repeat over and over. Just looking again at the name Theodore - dore could be linked to door or Druid - the name Dürer, as in the famed Albrecht Dürer meant door.

Interestingly, Wikipedia then goes on to state the following;

The fact that Irish monks equated the name Tuath Dé with the Israelites is fascinating and once again plays into the idea that our current interpretation of history is quite confused. Anyone who has read my previous posts will be aware that I have a vague reinterpretation of history that states that the history of the Jewish peoples is quite different to what we think (like most of human history). I'm of the opinion that most Jewish people have roots that lie in Europe and that these roots go as deep as all the other peoples of Europe (Judas in medieval times was generally depicted with white skin and red hair).

I think many of the problems we see in the world today stem from our confusion regarding history.
Posted by Neil at 7:10 PM