Cataloguing the Mechanics of the Consonants

Recent conversations with people on this topic have accelerated my thoughts a little. So I've decided to write an article cataloguing the consonants not just by their sound, but also by the mechanics of how we make them with our mouth. I think this may be a more practical approach.

In my last post on the topic I was left with 12 consonants - or 16 including the "push" consonants. Since then I've came to the conclusion that the th sound - as in words such as the, this, these, etc - is a unique consonant sound, which can't be made by any combination of the other basic consonant sounds I've listed. I think I'll bring back the thorn symbol to represent that particular sound - though annoyingly the word thorn would be spelt forn in my stripped back alphabet.

- - The thorn symbol in its upper and lower case forms; Þ, þ

[For some interesting thinking and theorising regarding the history of the letter thorn, and regarding language in general see the following;

The addition of thorn now gives me the following collection of consonants; 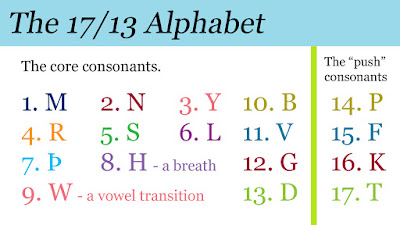 I talked about the letter [M] a few posts back. It's the sound made by simply closing and opening the mouth. I also mentioned the many words containing [M] that seem to relate to this simple action. Particularly with relation to eating. We have onomatopoeic terms like Mmm and nom. We also have words like mouth, mother, mam, mammary and milk. Possibly suggesting this association is hardwired deep in our very nature.

Interestingly, the iconic mother figure in western Christian culture is also known by names beginning with M - the Virgin Mary, Mary Magdalene, Madonna. You also have Martha of Bethany in the New Testament, another female witness to the resurrection of Jesus. The similarity of the words mother and martha is also worth noting.

Muhammad is another name with the recurring M sound. Perhaps the popularity of the name has something to do with its structure. Maybe there is something aurally pleasing about this [M] sound, rooted in our nature. We also have Maid Marian, Marilyn Monroe, Mickey Mouse, etc in popular culture.

(Oh, and I forgot to mention the word meme.)

The [N] sound is made by pushing the tongue against the roof of the mouth beneath the nose. This may be why we have words like nose and nasal beginning with the [N] sound? We also have words like nudge, knead, nestle, etc that may link to this action of pushing or pressing.

The [Y] sound seems to be made by pushing the sides of the tongue against the inside of the top row of teeth.

The [R] sound is made by curling the tongue backwards. Again, it's interesting that we have words such as roll and curl containing this [R] sound.

The [S] sound is made by closing the teeth together, but keeping the mouth open. When I was looking at [M] a few posts back I also looked at [S]. With [S] what is obvious is the hissing snake association, giving us words like sly, slither, slink, slide, snide. Again, this seems to be deep rooted in nature.

The [L] sound is made by moving the tongue up and down. Interestingly, many of the words we have for lifting things up or down begin with L - lift, lay, loll, lull, lie, lever, lower.

When we make the th sound we seem to sandwich the tongue between the top and bottom rows of teeth.

I consider [H] to be a bit of a special case. It seems to be the natural sound of someone breathing in or out. Basically a breath or pant.

I also consider [W] to be something of a special case too. It seems to be the fast transition between two vowel sounds.

I find both the [W] and the [H] sounds quite fascinating. They seem to express something very organic. For example, when someone opens their mouth in shock we have the expression "wow". When someone does this there's a gasp of air. If this gasp is accompanied by a vocalised burst of sound we get the [W] sound as the mouth quickly widens.

We also have words like whoa which convey a similar sentiment. In the case of whoa we also have the [H] sound as well. Again, representing perhaps the burst of breath that accompanies the shock which inspired it. This may help explain the difference between where and were too. For many people these two words often get confused as most of us simply ignore the [H] when we speak or read the word "where". However, when we use the word "where" we're generally using it to ask a question, whereas the word "were" is generally used to talk about the past.

When we're asking a question we're usually much more animated than when we're discussing the past, and when we get a shock or bad news the first response is usually a stream of questions - whoa! what happened? when? where? why? how? So the added [H] in where, and in other similar words, probably reflects this burst of breath that accompanies the question.

The difference between whoa and woe is perhaps a similar example. We usually feel "woe" or pity when we're thinking about bad things that have happened in the past, whereas "whoa" is the response we have to something we're instantly experiencing. 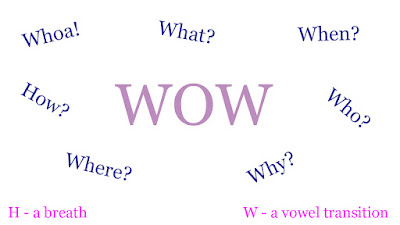 The [B/P] sound is made by pushing the lips together, then "popping" them apart again.

The [V/F] sound is made by biting the bottom lip.

The [G/K] sound is made by pressing your tongue to the back of your mouth. Interestingly we have words associated with retching (sorry!) that contain this G/K sound - gag, sick, cough.

The [D/T] consonant is made by pressing the tongue behind the front teeth. Interestingly, the words we have for describing the teeth are teeth, with a T, and dentures with a D.