The Ten Vowel Sounds in the English Alphabet: Update

This is just a quick post hopefully. In the last few days I've noticed something that I'm surprised I didn't notice earlier. When I tried to map all the different vowel sounds in the English language I counted ten distinct ones. This gave me a problem as it meant I had ten sounds to represent, but only five vowel symbols in the English language to use. The vowel sounds I identified were the following; 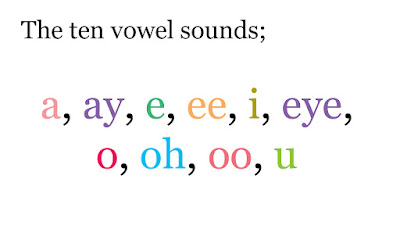 I then added three new symbols (keeping the double [ee] and [oo] for simplicity), which gave me the following list of vowel symbols, corresponding to the ten sounds above; 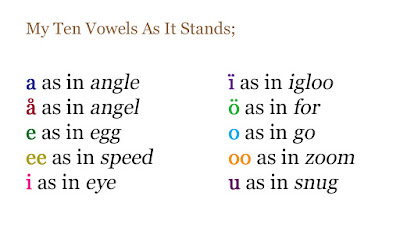 Interestingly, what hadn't occurred to me was the difference in the sound of the five standard English vowels depending on whether we pronounce them as a capital or a lower case letter.

So;
So if you combine both the capital and lower case pronunciations the five vowels seem to embody all ten vowel sounds. The only one that is a little iffy is the capital [U] which is pronounced with an added [Y]. Of course, you can't use capital letters willy-nilly, only in certain places. So you would still have the problem of knowing whether the middle [a] in the word parade was pronounced as an "a" or an "ay" if you weren't already familiar with how the word sounded, and had just seen it written down on paper. It couldn't be written down as parAde for example.

It's very curious though, unless there's some obvious reason explaining it that evades me at present. It adds a certain neatness to the five vowels that wasn't previously there too. The way we use vowels in English has always seemed incredibly higgledy-piggledy to me (I'm using some quite fluffy language today xD). For example, taking the [oo] or [U] sound we have; zoo, you, new, blue, lieu, etc - all using different vowel symbols, but essentially conveying the same sound. 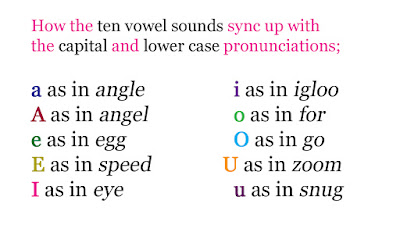