I've recently read The Tree of Common Wealth by Edmund Dudley - of the famous Tudor Dudley line. I found it on Google Books by accident whilst searching for other things. It was written while he was imprisoned in the tower awaiting execution for high treason, in the early days of the reign of Henry VIII. 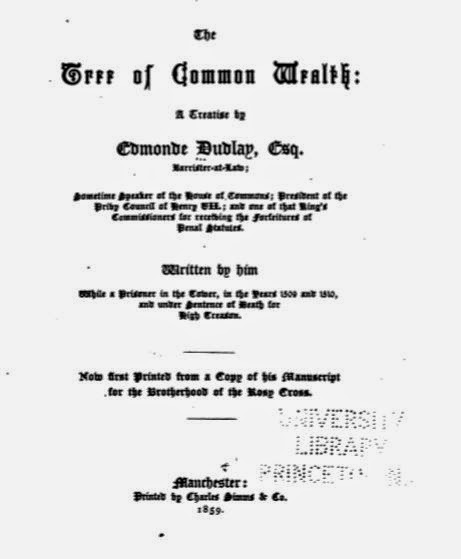 The book basically sets out the rules for managing a good and prosperous kingdom, using a tree and its various fruits as a metaphor. The treatise was interesting in of itself, however what aroused my curiosity also was that the edition I'd came across had been published in the 19th century by a Rosicrucian order.

Now first Printed from a Copy of his Manuscript


for the Brotherhood of the Rosy Cross.

Later on in the preface it then states;


This small contribution to the literature of the Tudor period is respectfully offered to the student and lover of history by The Brotherhood of the Rosy Cross.

I thought that was pretty cool, but then again I have read a lot of conspiracy stuff.
Posted by Neil at 7:42 PM