I've also just read the play Mucedorus. This is another apocrypha play and was linked with Shakespeare because it was a King's Men play. I don't really have much to add about this one, although I should say I did really enjoy reading it. 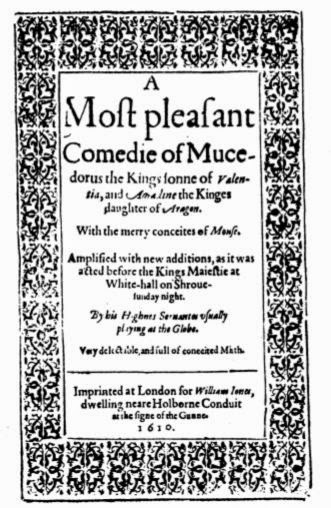 On a wider note I should mention that I'm starting to feel a little out of my depth regarding the whole apocrypha thing. I've been reading about the First Folio and it seems that the Shakespeare canon was decided not long after his death and the absence of the apocrypha plays rests as much on the fact that they weren't included in this as it does on anything else. So I've maybe jumped the gun a little in blaming later generations. I guess they were just being true to the First Folio.

It still all seems very odd and dodgy though. I'll learn my lesson and keep plodding on. I'll get there in the end.
Posted by Neil at 8:18 PM