A while back I posted about how the name Mary Magdalene could be rendered as Mermaid - Mer/Mary meaning sea, and Magdalene being a variant of Maiden/Madeleine. Anyway I've been thinking about this some more and I think I've came a little further.

I was thinking along the lines of Mary equals Marry. Today a marriage is a ceremonial coupling of two people, however I think originally to marry someone would've simply meant to have sex with them. In days of yore people would've no doubt simply had sex, bore children and settled down together. I'm sure a marriage is just a formalised celebration of this.

If marry meant sex then that would explain the meaning of the term marred or mar - spoiled, impure. It would also make sense in regards the term getting merry. It would likewise explain why in Tudor times (and no doubt earlier than that) the term mermaid was used as a euphemism for prostitute - Mary Queen of Scots famously being described as such. Mermaid (marry-maid) would simply translate as sex-maid or alternatively mar(red)-maid. This brings us back full circle to Mary Magdalene - her name would be rendered likewise, and this'll be why she's universally decried as a prostitute or fallen woman.

Incidentally, merrymaids was an old English name for mermaids.

When applying this translation of Mary to the Virgin Mary things make equal sense. Virgin Mary simply becomes Married Virgin or a Virgin who's had sex. Hence, Jesus being born of a virgin simply means he was born as a product of sex, like everyone else. Maybe with the added interpretation that he was born of an honourable, married or chaste woman.

In other posts I've argued that Jesus was simply a symbolic everyman - not a real historical figure. In this light the Virgin Mary is likewise simply an idealised personification of motherhood.

On a slightly different topic, mermaids often appear in the paintings of Saint Christopher carrying Christ across the waters in Medieval churches. I've been trying to work out where that would fit into things, but it eludes me at the moment. There were more wall paintings in English churches of Saint Christopher than of any other saint. His name means 'Christ-bearer', but I wonder if maybe Chris equals cross - like the term criss-cross. Having just looked up the etymology of crisscross I'm told it's from the term Christ's-cross. It just looks like the same word repeated to me though.

Is Christ someone who crosses water? Is there some sort of birth symbolism there? Crossing the threshold into this world, via birth? I should remember that the symbol for Christ was the fish. Again it seems to tie in, but I'm not quite sure how. The fish symbol correlates with the Vesica Piscis - the shape created when two circles intersect. In medieval art Christ was often depicted within a Vesica Piscis - which some people say was a symbolic representation of the female genitals. 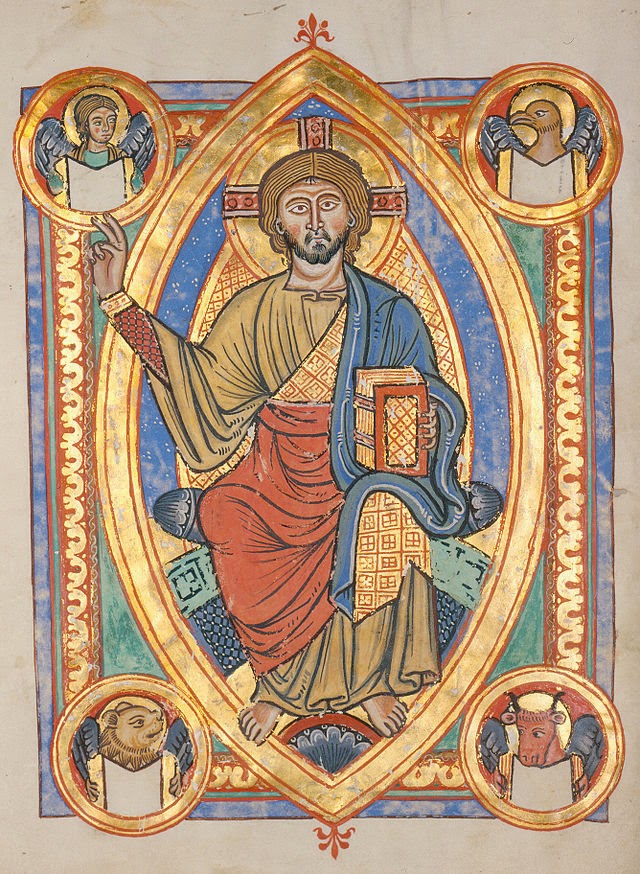 I think the whole Christ story is a symbolic tale about man's place in the universe.
Posted by Neil at 7:54 PM