Atlantis: Are We There Yet?

I recently read A Brief History of Atlantis: Plato's Ideal State by Stephen P. Kershaw. It was a really enjoyable read, so I highly recommend it to anyone interested in the Atlantis topic. Though if you're an Atlantis enthusiast be warned it does tend to err on the side of mainstream academia. The book provides a quite comprehensive overview of everything that's been written on the topic of Atlantis since its first mention by Plato in his works Timaeus and Critias. The information re ancient sources is particularly excellent. I'll share a few of the bits I found especially curious below. 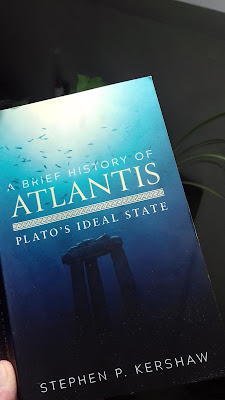 First up is the following piece of information concerning the Carthaginians. It comes from a work titled On Marvellous Things Heard, once commonly attributed to Aristotle, but now thought to be pseudonymous. The passage states that the Carthaginians knew of an island out in the Atlantic ocean, but kept their knowledge hidden through fear of competition.

This mystery island would be alluring to Atlantis-hunters for obvious reason, however, it caught my eye as the idea seems to tally with flat earth ideas of hidden land ..and the power in knowing (or not knowing) the extent of the terrain. It seems to give a historic example of the extent to which some people will go to keep others in the dark.

Another interesting snippet from the book concerns the god Atlas, said to be the first king of Atlantis. Not to be confused with the more commonly known Atlas, the Titan from Greek myth who was condemned to hold the sky above his head for eternity. Though it would seem both these gods are just variations on a theme.

"A further euhemeristic interpretation explains that Atlas [king of Atlantis] perfected the science of astronomy and was the first to publish the doctrine of the sphere, which is the 'reality' behind the myth of Atlas supporting the world on his shoulders."

Euhemerism is an approach to history which presumes that myths are garbled or embellished versions of real historical events. In the notes the book then offers the further information;

"Diodorus says that Atlas 'discovered the spherical nature of the stars'; numerous ancient writers refers to Atlas as the discover of astronomy."

It's probably also worth mentioning that the name Atlantis is said to mean belonging to Atlas or effectively the Island of Atlas. However, I wonder if maybe the history is all a little garbled. Perhaps the word Atlas/Atlantis once had a more general meaning. We have the English word atlas, simply meaning a collection of maps. Now it's said that this word derives from the myth of Atlas holding the world aloft, but maybe it's the other way round.

For example, we have older map collections which use the word "atlantis" - with the word being used in the same sense as the word atlas. Such as the following, which is the title page of a map collection by the cartographer Johannes Janssonius. It dates from the 17th century. 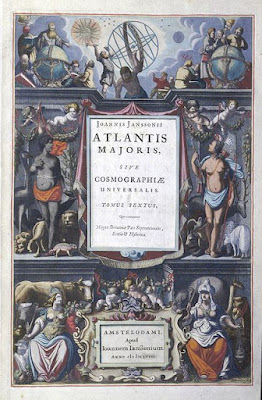 So in this case it would seem that the word atlantis is simply Latin for atlas. In this reading Atlantis would simply be the map - or in effect the known world. So Atlantis is the world - the very world held up by the figure (perhaps symbolic, rather than mythological figure) of Atlas.

With this reasoning Atlantis, far from being a lost or unknown land, would, quite ironically, be the very much mapped and known land we're standing upon. There in plain sight all along.

Of course orthodox history would forbid us from thinking that such a word usage could precede Plato's tale. Or rather that Plato's tale could be a much more recent invention (perhaps why it isn't mentioned by Herodotus, etc). Fortunately though I don't feel such constraints. It's my general view that most if not all ancient Greek and Roman texts date from within the last one thousand years - i.e. they are from the medieval period and onward.

For example, take the following from the book A History of the World in Twelve Maps by Jerry Brotton, which ties in with the current theme quite nicely;

"After its completion, Ptolemy's Geography disappeared for a thousand years. No original copies from Ptolemy's own time have survived, and it only reappeared in thirteenth-century Byzantium.."

"Turning to Ptolemy's biography to try to understand the significance of his book offers little help. Virtually nothing is known about his life. There is no autobiography, no statue, not even an account written by a contemporary."

It's hard to have confidence in such "ancient" dating when the texts are so recent, and that's assuming the text dates are correct.

Also, if Atlantis is simply the "known world" then the myth becomes even more similar to the Biblical flood myth, and the flood in the Gilgamesh epic. A topic touched upon in A Brief History of Atlantis. In fact, one final thing from the book that I should mention before I finish concerns this. It mentions the flood story in the Epic of Atrahasis - an Akkadian epic which gives an account of the great flood which has overlaps with that in the Epic of Gilgamesh.

The tale states that the gods deem men too noisy and that it would be better to eradicate them. However, after the flood it's decided that mankind can remain, but that population numbers must be kept down to keep the noise within acceptable limits...


"..when they find out Atrahasis has survived, they decide that the noise will remain within limits, invent childbirth and infant mortality, and establish celibate priestesses and high priestesses in order to cut down childbirth."

Welcome to Atlantis.
Posted by Neil at 6:44 PM