This is a theme I first wrote about a very long time ago. I remember reading biographies of John Lennon in my late teens and early twenties and being surprised and delighted to find that he seemed to be interested in many of the esoteric or fortean ideas that I myself was. It shouldn't have been surprising really as alternative ideas permeate the work of the Beatles. Meeting the Maharishi, Aleister Crowley appearing on the cover of Sgt. Pepper's, and so on and so forth.

Anyway, I've been reacquainted with the theme recently simply by virtue of the fact that I've been watching a lot of Beatles documentaries and footage on YouTube. Particularly stuff in regard to John's death. So I thought it would be an interesting topic to readdress. Plus my original articles on the theme aren't up online anymore ( they were pretty awful tbf xD ).

There's a fair bit I have to relay today, so I'll try to keep the writing short and trashy. I'll start with the UFO stuff, which is generally fairly well known. Then finish with the more recent flat earth stuff. Cramming everything else in between the two. 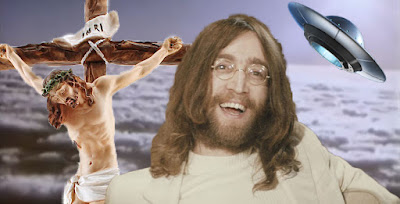 Lennon claimed to have actually seen a UFO in New York in the summer of 1974. In the sleeve notes for the album Walls and Bridges he makes reference to it;

He also speaks about it in the following radio interview, claiming that it was so close "I could have hit it with a brick if I'd have thrown a stone at it".


(Lennon speaking about the incident)

There are also references to UFOs in some of his songs.

In the song Out The Blue he states;

Like a U.F.O. you came to me
And blew away life's misery

And in the track Nobody Told Me he states;

The illusionist Uri Geller also claims that Lennon told him of an actual alien encounter in his Dakota apartment. Where he was accosted by bug-eyed men who gave him a strange metallic egg. An egg which Lennon then gave to Geller.

Now personally I'm of the opinion that Geller is a professional charlatan, so I think the story is completely fraudulent. Even from a credible source though such a story would be difficult to take seriously. Entertaining though nonetheless.

Religion, Esoterica and Other Alternative Ideas

I'll just rattle off some of the other topics Lennon was interested in here.

According to the book Lennon in America: 1971-1980 by Geoffery Giuliano, Lennon went through a Christian phase.


John became convinced he was receiving divine communication from the Lord. He called The 700 Club prayer line on several occasions to seek help for his failing eyesight, troubled marriage, and various addictions. Lennon even recorded a tune that he never especially liked, "Talking with Jesus," and was further inspired to compose several other unrecorded Christian songs, including a musical version of the Lord's Prayer, called simply "Amen."

Of course, it's worth bearing in mind that the book was published after Lennon's death so it's perhaps unfair to simply take all this on face value. Plus Lennon's sense of humour is often misread by people. I would guess that his interest in Christianity was sincere and heartfelt, but that writers such as this tend to bend things towards a less flattering lilt. Listening to Lennon speak he always comes across as brilliantly rational, so such portrayals seem a little misleading to me.

The book also states that Lennon took an interest in the religion of Islam too.


John's latest spiritual diversion was a fascination with Islam. He adopted the Muslim tradition of fasting, glorifying Allah, and constantly thanking him for his many mercies. As usual, his conversion lasted only a few frantic, over-the-top days.

Again this sounds like a misreading of someone taking a genuine interest in something.

Lennon and Yoko also dabbled in astrology and used it to help make predictions about their business ventures. Business ventures that were becoming increasingly serious towards the end of Lennon's life. One wonders what plans they had for the coming years?

Interestingly, Lennon also took part in past-life regression sessions as well. He was supposedly regressed back successfully to some of his earlier lives. Including one where he had lived during the Crusades and another where he had lived as a Neanderthal hunter-gatherer in pre-history. Listening to Lennon speak about this in interviews though it appears it was something he went along with more out of politeness towards the practitioner than through genuine belief.

Lennon also enjoyed occult literature. One of his favourite books concerned the Spear of Destiny - the spear used to pierce the side of Christ at the Crucifixion. Again, from the above Lennon in America book;


..Lennon dove head-long into the wacky world of the occult. One of his favourite paperbacks addressed the Lost Spear of Destiny, the lance allegedly used to pierce the side of Christ at his crucifixion. Always fascinated by religious relics, John called on Green to try to divine the location of this coveted article.

Lennon had visions of playing the adventurer and taking a bus tour of southeastern Europe (thought to be the site of the relic) to search for it. When Green asked what he would do with the spear, John responded that he could do anything in the universe. He'd always had brilliant ideas for action, he said, but only lacked the mystical force necessary to put them into action.

Further evidence for this interest in the esoteric comes in Lennon's song Mind Games where he mentions the Holy Grail;


Some call it magic to search for the grail

Also, in regards conspiracy theories Lennon actually gave money to help fund the radio host Mae Brussell, whose work focused on the JFK assassination among other things. From Wikipedia;


John Lennon and the Flat Earth

The links made online between Lennon and the flat earth all tend to stem from his song Watching the Wheels. It contains the following lines;


Don't you miss the big time boy you're no longer on the ball?

I'm just sitting here watching the wheels go round and round


I really love to watch them roll

It doesn't contain a direct reference stating the world is flat, however, it's easy to see why people would interpret it as so - no longer on the ball, no longer riding the merry-go-round. Again though, they're interpretations about a song made after the man's death, so it's maybe unfair to overstate any perceived connection.

Digging further though there are a few more interesting avenues to take this down. Firstly, John Lennon and Yoko Ono actually launched a hot air balloon in 1969. It was for a film tilted Apotheosis - meaning the elevation of someone to divine status. Some of the footage was also used in the video for the song Nobody Told Me. Of course, high altitude balloon footage is now a big feature in the flat earth scene. So it's interesting to speculate as to why Lennon and Yoko were so interested in getting a view from above the clouds.

Also, Double Fantasy - the album containing the song Watching the Wheels - was released just three weeks before Lennon's death. In fact, Lennon's killer, Mark Chapman, actually recited lines from the song whilst in custody. Chapman also famously carried a copy of the novel The Catcher in the Rye whilst carrying out the murder. A book that has concurrent themes - such as the carousel which features at the end of the book. The imaginary "catcher" in the book also stops children from falling off the edge of a cliff. Something that perhaps has echoes of people being stopped from falling off the ends of the earth. In fact, the following documentary about Lennon's death is well worth watching in this regard. Though the tone of it seems a little creepy and disturbing.

Also, you could kind of say that the album cover for Season of Glass, Yoko Ono's first album following Lennon's death, has allusions to flat earth. It features the horizon, level water and what I'm guessing are John's blood-spattered glasses. 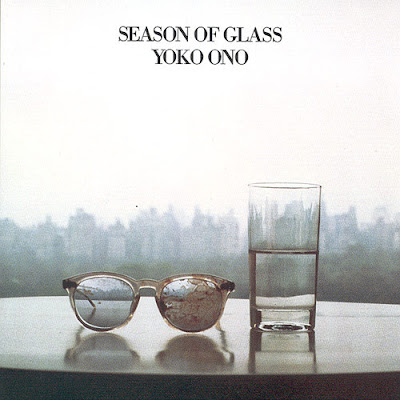 Again though, this is all just idle speculation, and it would only be fair to leave the last words on the topic to Lennon himself. When asked by Rolling Stone magazine what the song Watching the Wheels was about he replied;

The whole universe is a wheel, right? Wheels going round and round. They’re my own wheels, mainly, but, you know, watching meself is like watching everybody else. And I watch meself through my child too.

Finally, to round things off, I'll provide a few quotes from one of John Lennon's final interviews. It was conducted by Playboy magazine and shows how truly awake John and Yoko were at the time.

ONO: "It's a hard realization. These days, the society prefers single people. The encouragements are to divorce or separate or be single or gay... whatever. Corporations want singles-- they work harder if they don't have family ties. They don't have to worry about being home in the evenings or on the weekends. There's not much room for emotions about family or personal relationships. You know, the whole thing they say to women approaching 30 that if you don't have a baby in the next few years, you're going to be in trouble, you'll never be a mother, so you'll never be fulfilled in that way and..."

ONO: "So instead of the society discouraging children, since they are important for society, it should encourage them. It's the responsibility of everybody. But it is hard. A woman has to deny what she has, her womb, if she wants to make it. It seems that only the privileged classes can have families. Nowadays, maybe it's only the McCartneys and the Lennons or something."

LENNON: "Everybody else becomes a worker/consumer."

ONO: "And then Big Brother will decide. I hate to use the term Big Brother..."

ONO: "The society will do away with the roles of men and women. Babies will be born in test tubes and incubators..."

LENNON: "Then it's Aldous Huxley."

The full interview can be found here;
http://www.beatlesinterviews.org/dbjypb.int4.html