The Age of Stage Fright

Anxiety and the Rise of Civilisation

We all understand the concept of stage fright, that horrible nervousness that overcomes a person when they have to perform or speak in front of any kind of audience. It's a nervousness that can even come with physical side effects - sweating, dry mouth, stuttering, dizziness. Even such things as blurred vision or fainting. Of course, there's nothing physically wrong with the person. No disease or illness. Nevertheless the fear of performance, or perhaps the fear of the social consequences of a bad performance, can cause physical symptoms. Physical symptoms that can be difficult and even impossible at times to control.

Anyway, I would argue that the seeming epidemic of social anxiety that we have at the moment is in someways a manifestation of this. Kind of a constant stage fright. A prolonged or chronic version of the stage fright we would normally only expect to experience in extreme or unusual social circumstances. 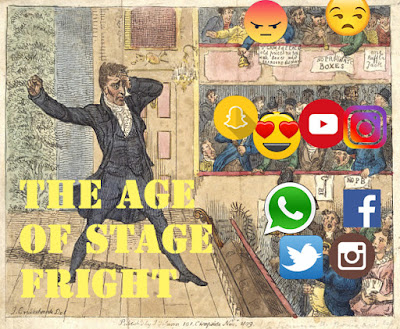 The Age of Stage Fright
(The original is a 1809 work by Isaac Cruikshank depicting
King John's first appearance at the New Theatre, Covent Garden)

With the advent of social media in particular it often feels like we're constantly onstage. Constantly having to perform. It may sound silly, but if you have one or two hundred friends on Facebook that's the equivalent to a room full of people. In fact, I would have loved an audience that big when I used to play gigs with bands ..and even with half that number I still used to get quite nervous. On top of this social media is 24/7. You're always on call, the office is always open. At times you'd like to simply ignore people, but that's a social faux pas. Plus if you do that you feel guilty, or bad for the person you're ignoring, so either way it's a negative experience.

Now, of course, you could just not use social media. However, there's a huge pressure to be online, and sometimes it's essential for work, relationships and other things. Plus there are also huge benefits to using social media - I don't want this to be just another tech-bashing article. There are obvious positives that come from being online, and that come from being able to be online around the clock.

I do feel we underestimate and misunderstand the psychological effect it has on us though. To always be "performing" for an audience takes its toll. All your mistakes seen by all and recorded forever. The pressure is precisely similar to being onstage, and comes with the exact same feeling that any mistake or failing will be seen by everyone and remembered for the rest of your life. Or at least for the next few years at any rate.

In fact, a slightly trivial, but telling example of this came only the other day. I was at a football match with my brother and as the row we were sitting in was full of people we were tempted to leave by climbing over the empty seats in front of us. However, there were so many people with camera phones that any slip or fall would have potentially become some kind of embarrassing "viral" event. So we decided to just slowly and politely push our way through the crowd. Had we have been in the same situation just five or six years earlier we'd have just clambered over the seats without a second thought. Now though we're all too aware that there may be someone filming us.

I think it's a similar situation with work in the modern world. In earlier times people tended to do physical jobs that required little social interaction. If someone was working down a coalmine, or better still, out with nature in the fields, they were simply expected to do their job. It didn't so much matter how they looked, or how they spoke, or how shy or confident they were. They just had to do whatever it was they were doing.

Now however every job seems to have social requirements. Even people in very low paid work are expected to present themselves in a certain way. It's very hard to simply be oneself in most modern employment. You really have to tailor your very personality to fit the position. It's kinda soulless.

People will often throw the label "lazy" at the unemployed. However, I think it's much more the social pressure that hinders people. Lots of people, including myself, hate "performing" for other people. In fact, the word "workshy" is perhaps more accurate in its literal sense than in its common usage in this regard.

This is also maybe why the modern world - from politics and the media downwards - seems to be dominated by fakers. People who are comfortable adapting their personality to whatever situation they're in, and who simply say whatever other people want to hear. Though again, I would imagine even these super-driven or super-confident people feel the heavy burden of constantly keeping up a facade.

This is where I think much of our modern social anxiety comes from. We're constantly having to adapt our outward personality for the needs of work, our social lives and its extension into social media. It wears people down. I think this is why people with anxiety often don't want to leave their bed or bedroom - it's the only place they get privacy ..and even then they need to switch off the phone or the tablet to get it. It's the only place they can really be themselves.

I'm not altogether sure what the solution to all this is though. Maybe over time people will just adapt. It's certainly not a natural situation for people now though. In fact, returning to stage fright itself, there was a time when people only experienced this at rare moments in their life - a wedding speech, a big interview, a performance in a play. It made sense that such huge important events would bring the eyes of our wider social circle, and with it nervous fits and butterflies in the stomach. It can't be good for people to be in that state, or a similar one constantly though.

I would guess that we'll probably have to change society in some way to allow people to relax more and let their hair down. Though again I'm not quite sure how.

People used to let their hair down on a night out, or at some other social event. Now though there are so many camera phones and so much is uploaded to social media that such events are just as fraught with the fear of embarrassment as a public speech or a job interview. People tend to be more concerned with how their night out "appears" to their wider social circle on social media than they are with how much fun they're actually having. Plus, your boss will probably see it all on social media too. As may your mam, your auntie, and everyone else. And, of course, anyone special you meet at some point in the future may see it if they decide to take a few minutes to scroll down your timeline.

Saying all this though, I do get the feeling that Facebook in particular is fading. In my experience people seem to be sharing less on there these days. Which I think is partly because people are starting to dislike the fact that so many people, from so many different parts of their social circle, can see things. For example, you don't necessarily want your parents, etc commenting on posts aimed at your work colleagues. So perhaps people are rebelling, or maybe just adapting to all this in some way.

It's definitely something that affects us all though. We may often say "we don't care what other people think of us", but we all do. In fact, we need to in order to establish boundaries and relationships with other people. It's an unavoidable part of operating in the social sphere.
Posted by Neil at 9:58 PM