In this post I'm going to be looking at the similarities between birds and dinosaurs. These similarities have been noted since the 19th century, so it's not a new idea. However, I would go a little further and suggest that something is quite askew with our current thinking about "dinosaurs", and that perhaps mainstream science is a little confused on the topic.

Firstly we'll just look at body shape. If we consider dinosaurs like the T-Rex or raptors we can notice that the shape and angles of their bodies are very bird-like. In fact, the only place we tend to see this body shape in modern day nature is in flying creatures like birds, and it makes perfect sense. When birds fly the head is naturally out in front of the body, the wings horizontal to the ground. 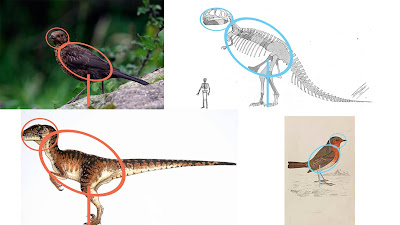 It's also worth noting how strangely small the dinosaur arms are. It's hard to imagine what purpose such tiny arms could have in nature. 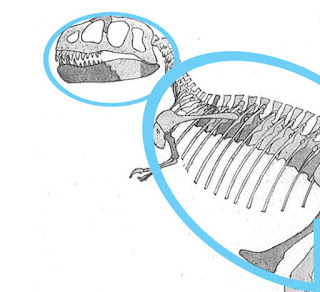 (The tiny arms of a dinosaur)

However, the similarity to birds doesn't end with the body shape. Dinosaurs, like birds, also often have hollow bones. Likewise they often have air sacs too. These are pockets of air within the body and are also common to birds.

There have been several reasons put forward for the presence of air sacs in dinosaurs - to increase respiratory capacity, to help improve balance and manoeuvrability, to act as part of a cooling mechanism. However, the most obvious reason in my opinion for hollow bones and air sacs would be to lower density. A useful and important aspect of achieving flight. Again the fact that birds have these features too would lend weight to this argument.

So when looking at the skeletons of creatures like the T-Rex I would speculate that they're either simply misidentified varieties of the wider bird species, or alternately that these are indeed "dinosaurs", just dinosaurs that are missing their wings for some unknown reason. Perhaps the material which the wings were made of was more prone to decomposition?

Also, of course, it has to be stated that often dinosaur skeletons are "reconstructed" from just a handful of bone finds. So it's also entirely possible that the inferences made from these few bone fragments about the wider "projected" skeletons are just plain wrong.

It also occurs to me how superficially similar the "dinosaur" is to the dragons we have in our various mythologies. It's almost like we dismissed dragons as myth with the rise of reason, but then we resurrected the archetype in a way that was more palatable to our post-enlightenment tastes. 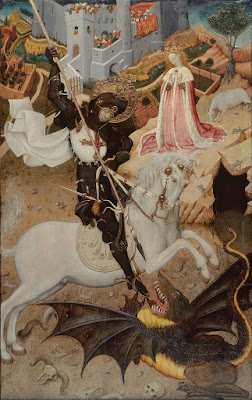 As a child it was always easy to confuse the two. Dragon and dinosaur toys always looked so similar. In fact, the only real difference between say a dragon and a T-Rex was the lack of wings. Quite interesting given the bird-like body shape of the T-Rex.

Of course, a T-Rex with wings would to all intents and purposes be a dragon. Minus the fire-breathing that is :)

So it seems you can follow the magical route and consider the idea that perhaps dragons were real after all. Or you can go down the more mundane route and simply re-brand all these "bird-like" dinosaurs as simply misidentified varieties of the bird fraternity. The much loved T-Rex and Velociraptors of Jurassic Park and wider popular culture may have to go though.

Then again, who really knows.
Posted by Neil at 1:39 PM